Origins of the JIM ADS

That well known oxymoron ‘old news’ probably best describes this page. Here are some newly received images that illustrate some oldish events: the very beginnings of the JIM suit development. These, along with the accompanying information, have been kindly provided by Andy Price (ADS and Camera Technician), with reference to Mike Borrow’s collection, and Mike Webb (Machinist and Project Engineer) who joined UMEL at Farnborough in 1975. A bit more for you to read this time, which hopefully you will find rather intriguing.

But first, see if you can work out what’s happening in this clip of a very early JIM trial.
Never mind if you can’t as it’s fully described below.

Image 1 shows Mike Borrow and Mike Humphrey, with Joseph Salim Peress, during tank trials at the Admiralty Experimental Works (Haslar), circa 1974. Others in the image are likely to be David Denison and David Hibbert from DHBC Ltd. Image 2 shows Tony Gisborne, second on the left, from the Atmospheric Diving Group (RNPL).

Mike Webb says his first task after joining UMEL was to turn Mike Humphrey’s designs into reality. This involved making limbs for his personal fibreglass (also known as glass reinforced plastic (GRP)) bodied SAM, shown in image 12. Andy observes that this project clearly demonstrates the early signs of Mike Humphrey’s vision of a more anthropomorphic ADS. You can see Mike Webb in image 3 machining the outside spherical surface of an elbow enclosure on a centre lathe using a radius turning attachment. In image 4 Alan Ette (Universal Miller) and a colleague are carrying out a trial assembly of arm ring adaptors on a magnesium alloy JIM torso at UMEL, Farnborough in the early 1970s.

Among JIM’s many original features were the oil drain holes which are clearly visible in image 8 and the, not very successful, finger manipulators in image 6. But, before looking too closely at the images, it might be an idea to check out these hotspots first as they could help you detect other differences between the early JIMs and later adaptations.

Last but not least, the above video provides a compelling comparison between the ADS and the diver as they each try to make progress against an 0.8 knot current. Notice the amount of effort the diver is having to make, as indicated by the bubbles he is producing, compared to the ease with which JIM manages the task. Could this be why the diver, seen in image 2, appears to be looking a bit glum? 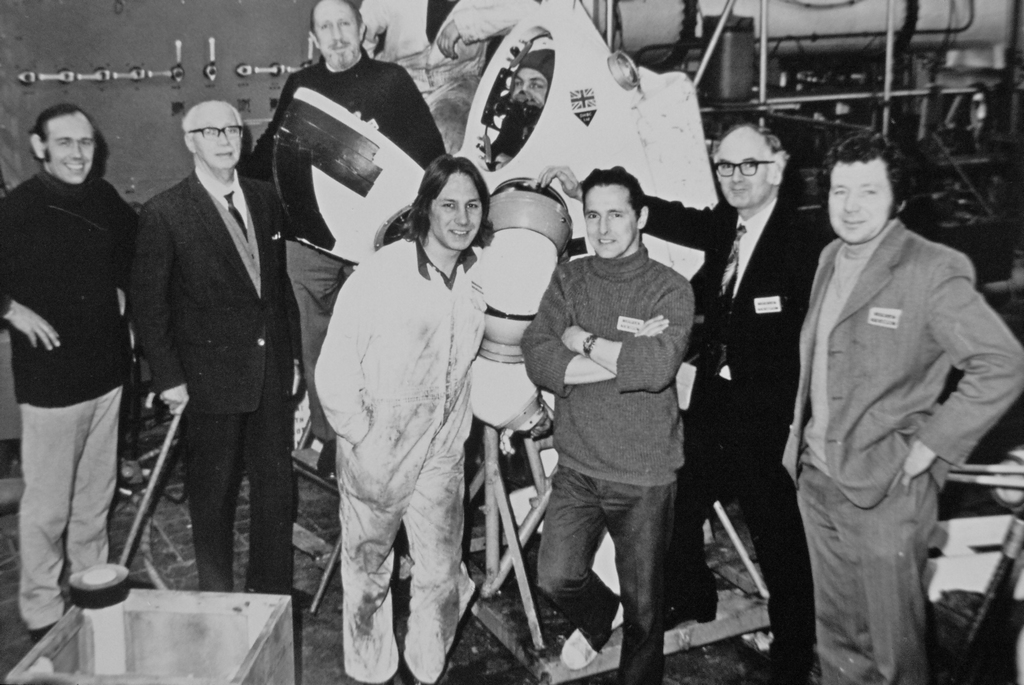 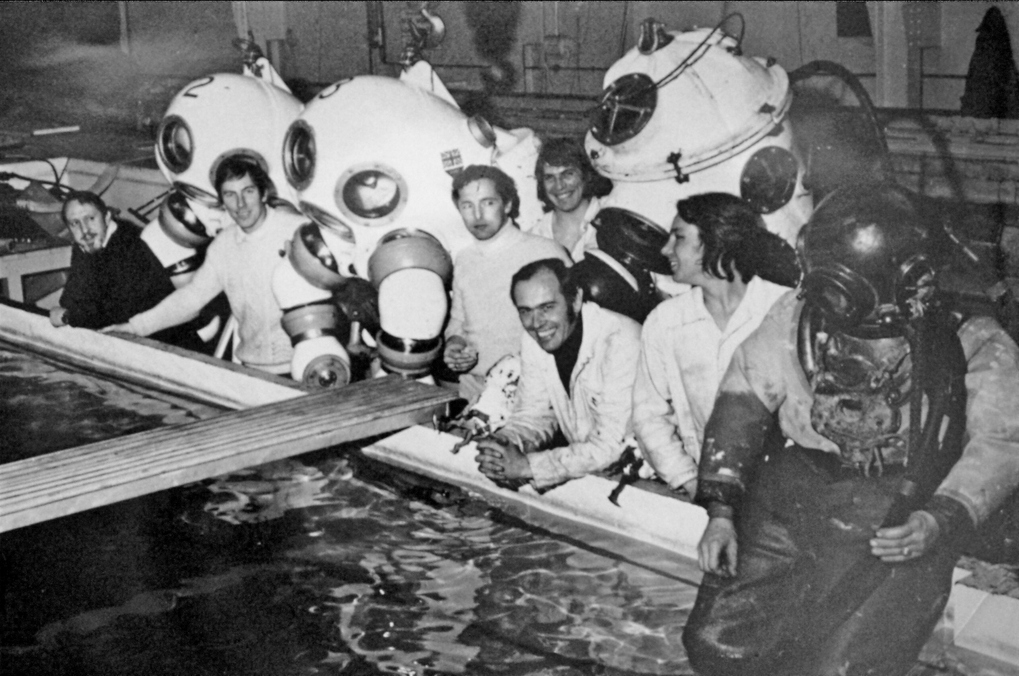 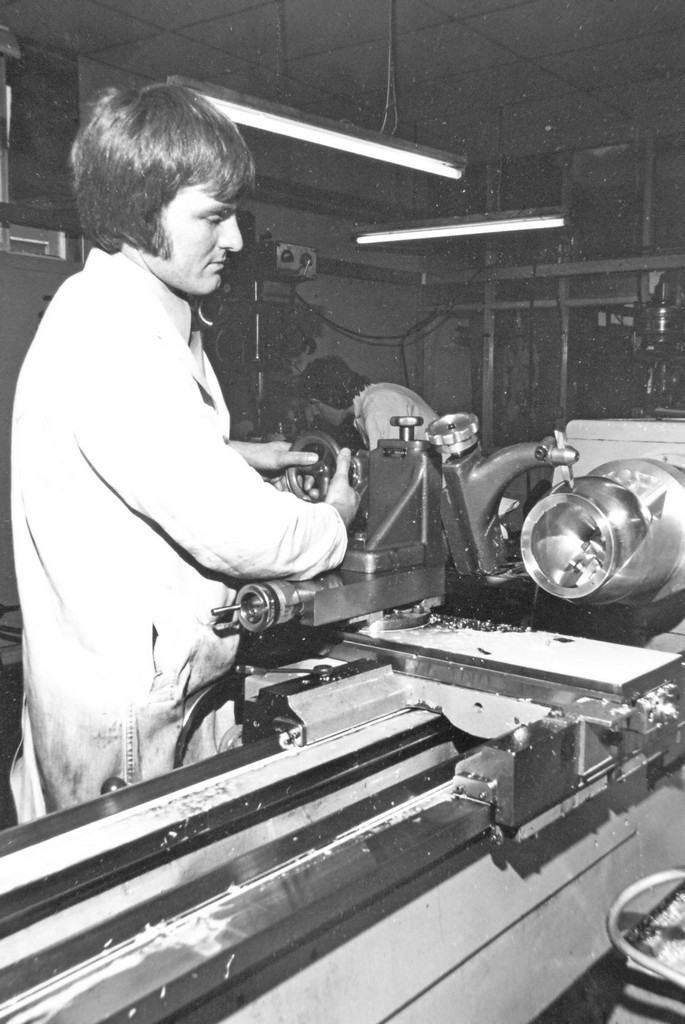 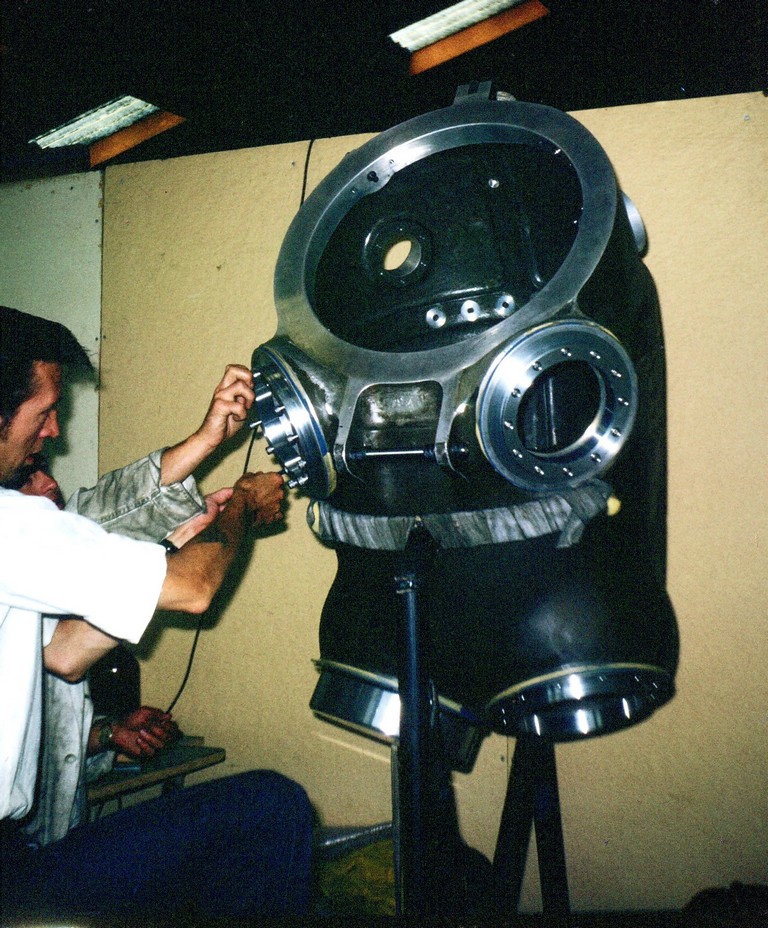 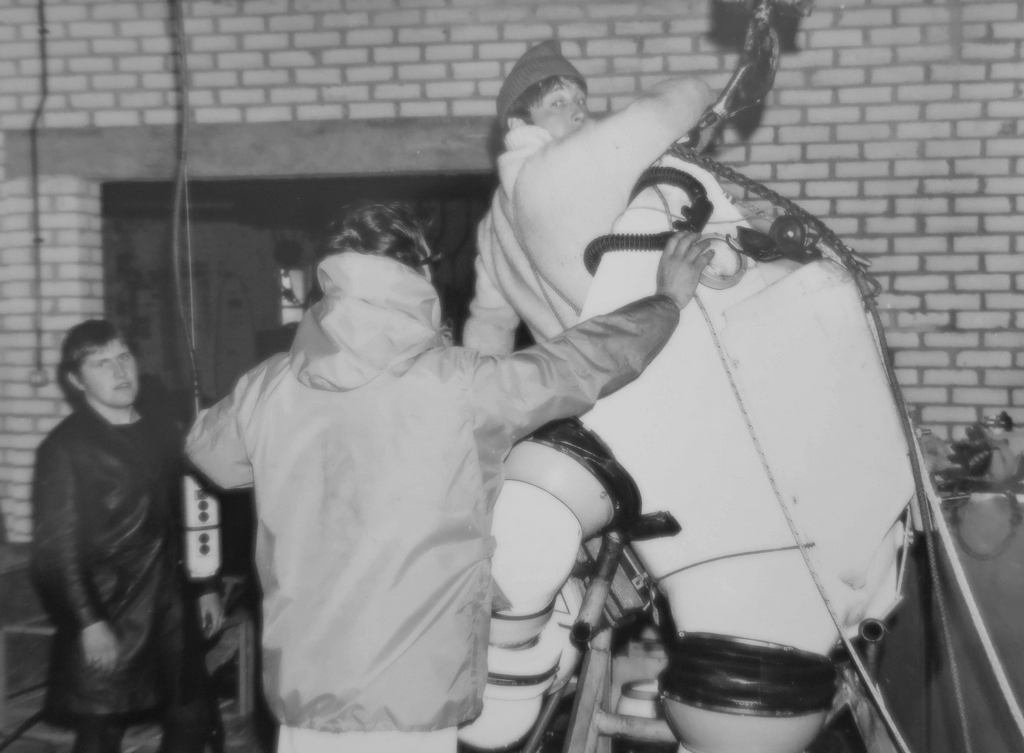 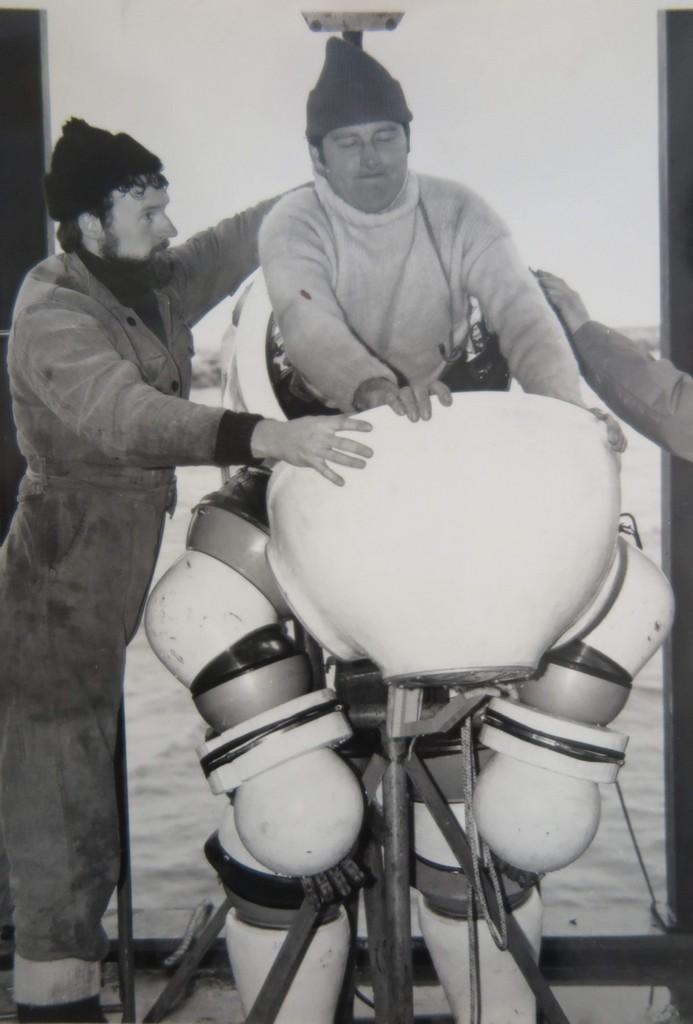 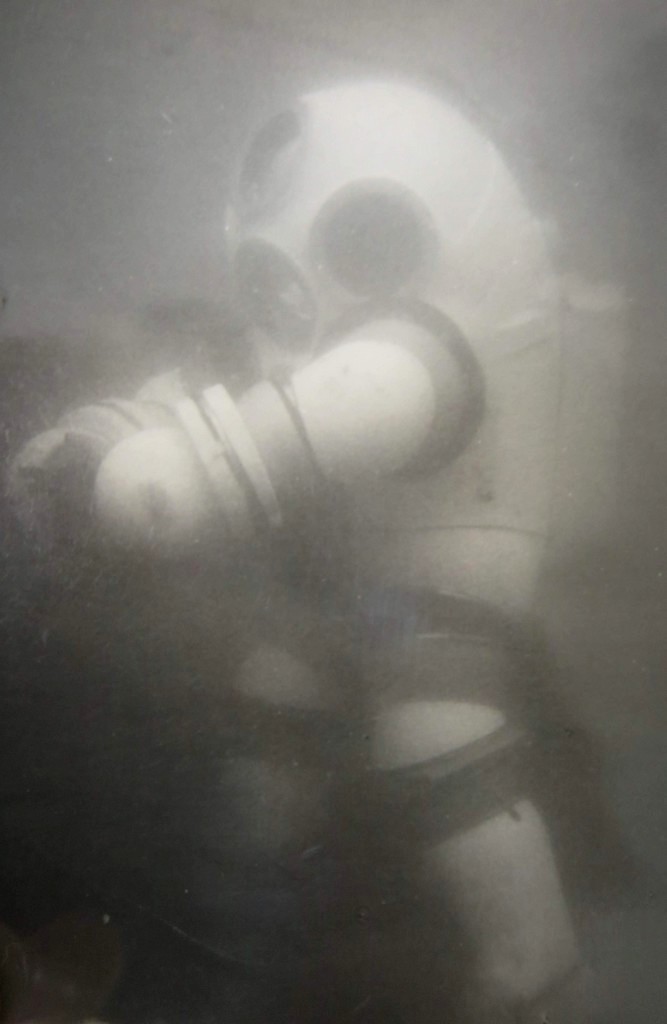 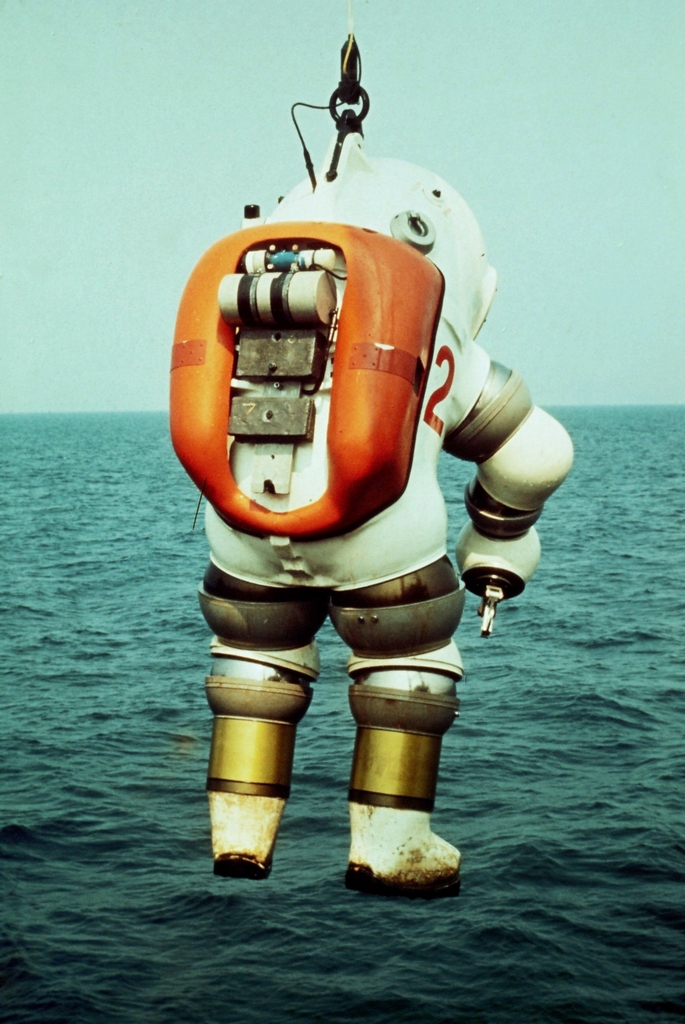 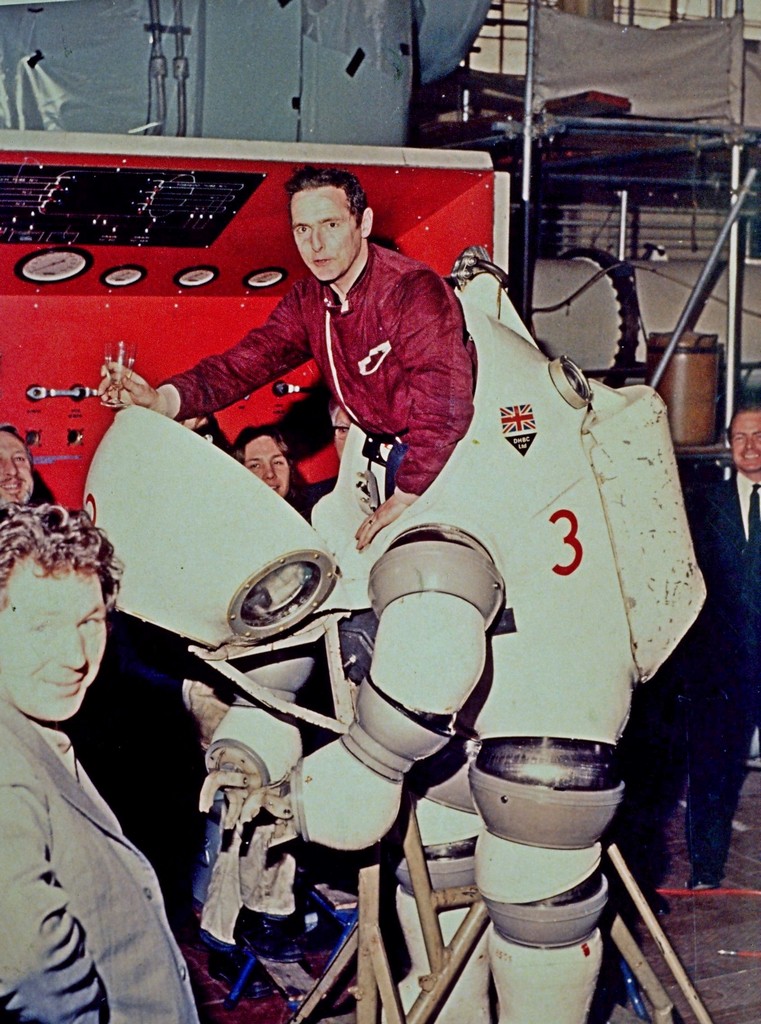 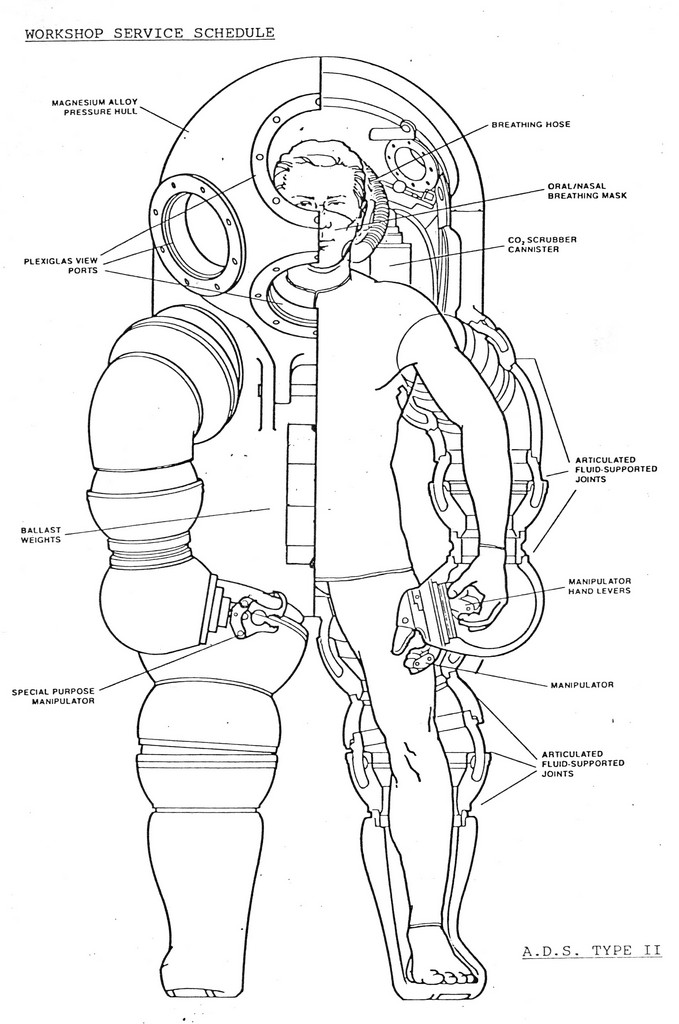 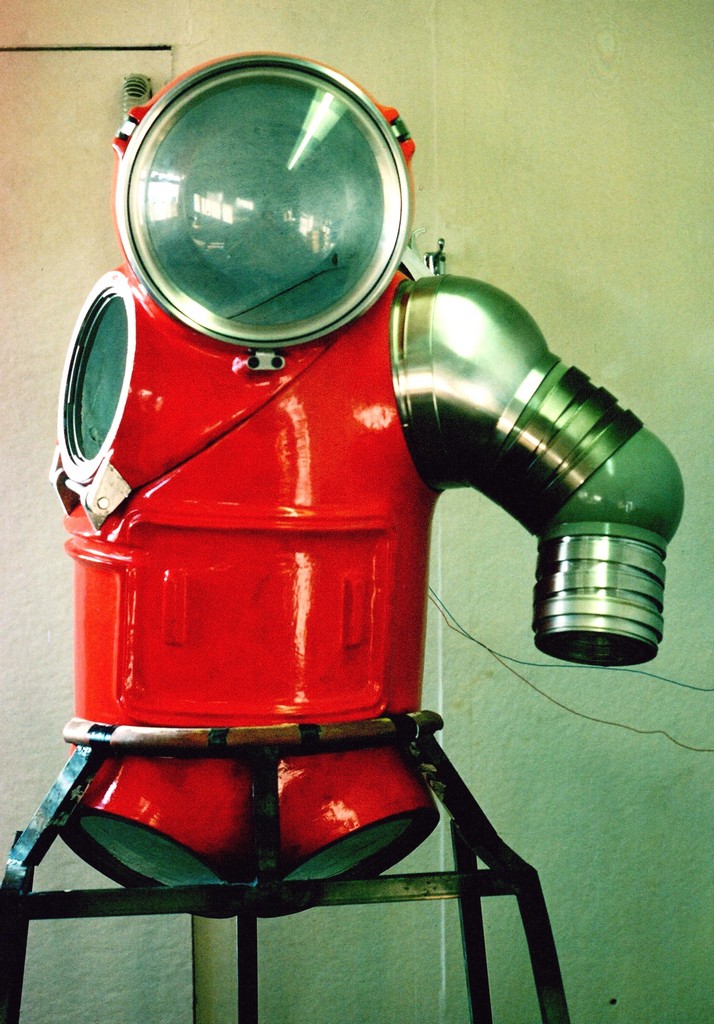