Diving was very much a ‘hot’ topic at the time and publicity was important in order to communicate our findings, not just to industry specialists but also to the general public as a means of justifying the research expenditure. JIM actually became rather famous in the process. A few examples of the range of JIM’s appearances are given below.

Today, JIM is still making an exhibition of ‘himself’ at various museums throughout the world.

The sticky, as opposed to the digital, type were very popular in the diving industry during the 1980s. They were put on various submersibles by commercial organisations as part of their brand image, becoming a collectable art form in their own right. Images 1 and 2 show some badge examples.

JIM appeared in the publicity material of the research establishments dealing with the mechanical and physiological aspects of the suit i.e. EDU and RNPL respectively. If you click on the EDU link you can see the full brochure for the establishment, the Evaluation section appears on page 20 with a rather good picture of JIM at the end. Image 7 was taken at a RNPL publicity session in the tank at AEW. It features JIM (operated by Richard) and Bob McKenzie (from the Respiratory Physiology team) in the scuba gear.

Among the many exhibits at the Brighton Subsea Conference in 1983 JIM attracted much attention, being a significant area of interest at the time, see images 3 and 4. In the same year JIM also attended an Armaments Exhibition at HMS Excellent, Whale Island.

On one extraordinary occasion JIM didn’t actually have to go anywhere to be seen ... but, to be honest, JIM 19 did have to travel back ‘home’ as it was borrowed from RNPL for the occasion. This was when HRH Prince Michael of Kent visited UMEL’s Bordon factory on 15 Dec 1982. In image 5 you can see Mike Borrow (far left), Mike Humphrey (with his back to the camera) and Andy Price (far right). Image 6 gives a better view of both Mike Humphrey and Andy Price.

JIM took on the role of ‘baddie’ in the James Bond film For your Eyes Only (1981) and became the ‘gentleman’ in the film Ein Herr und ein Hund, made by Austrian biologist and diving pioneer Hans Hass in 1983. The ‘dog’ being UMEL’s Remotely Controlled Vehicle (RCV) SEA PUP, of course.

Images 9 – 12 are courtesy of Neil Davies and show the For your Eyes Only set preparations. Images 13 and 14 are credited to Ein Herr und ein Hund. (1983). [DVD]. Directed by Hans Hass. Germany. Image 13 shows JIM and SEA PUP filmed together in the tank at the Admiralty Experimental Works (Haslar). In image 14 Hans Hass can be seen emerging from the JIM suit, which also rather neatly answers the question of the mystery man’s identity on this website’s Home Page.

Unsurprisingly, there does not seem to be a great deal of scholarly material on public release from RNPL itself. However, the following paper references some of the early work carried out by the establishment in relation to JIM: Carter, R.C. (1976) Evaluation of JIM: A One-Atmosphere Diving Suit. Navy Experimental Diving Unit Report 5-76.

The RMS Lusitanea sank in 1915 off the Irish coast in approximately 98 m (320 ft) of water after being torpedoed by a German U-boat and JIM was due to take part in a series of recovery dives to the wreck. This was covered in both the national (C. Simpson (1982) Big Jim from 007 transformed into deep-sea detective. The Sunday Times. 16 May, p. 5) and local press. Incidently it was SEA PUP, controlled by Mike Humphrey, which took the first pictures of the wreck of the RMS Lusitania.

One of JIM’s television appearances was on the children’s quiz programme RUNAROUND, produced by Southern TV and presented by Mike Reid. Episode 16 originally aired on 14 Jan 1981 and was repeated by Talking Pictures TV on 8 Nov 2020. It featured ‘deep sea diving suits’. So JIM and WASP accompanied by Neil, Tony, Richard, Angus (who did the interview) and Spike (who tried WASP on for size) went along to the studio to take part in the fun and talk about the different capabilities of the submersibles, see image 15.

Now there is the WEB, of course. JIM continues to maintain a presence on specialist international websites, such as DIVERNET, proving that a good idea has longevity ... 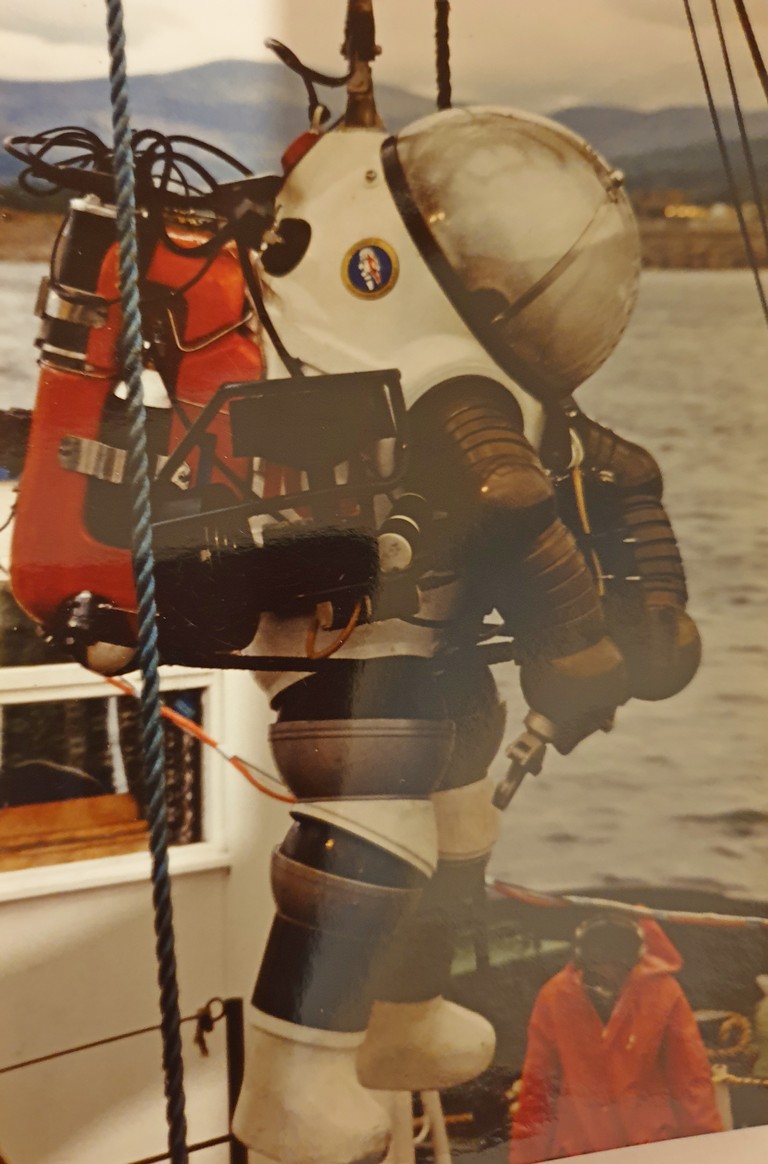 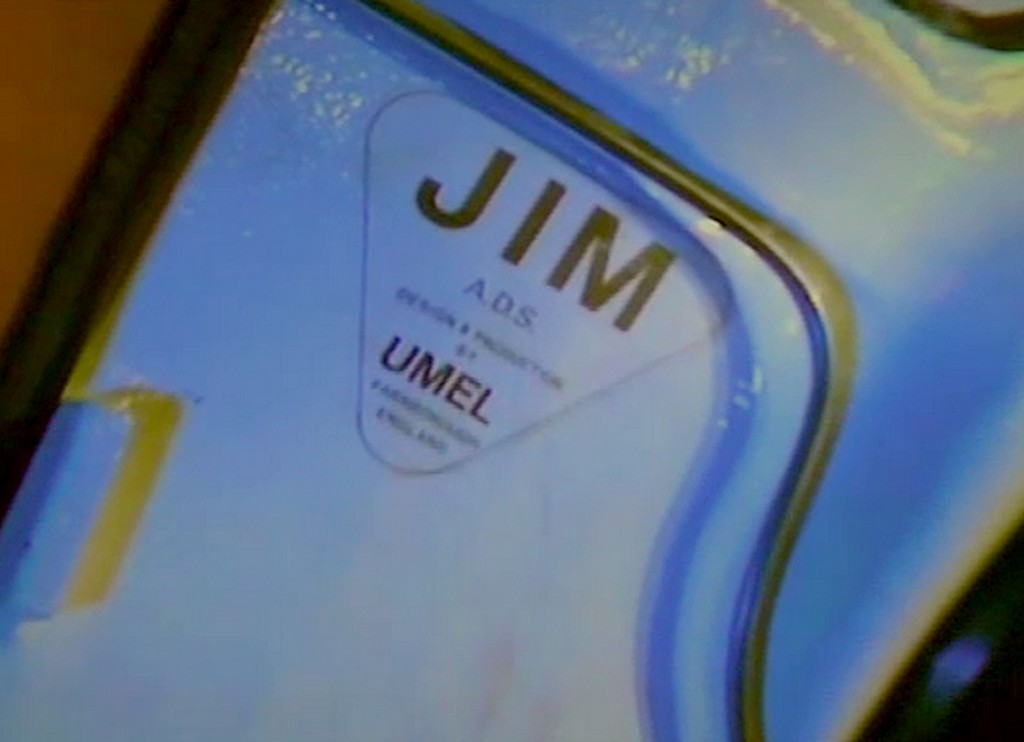 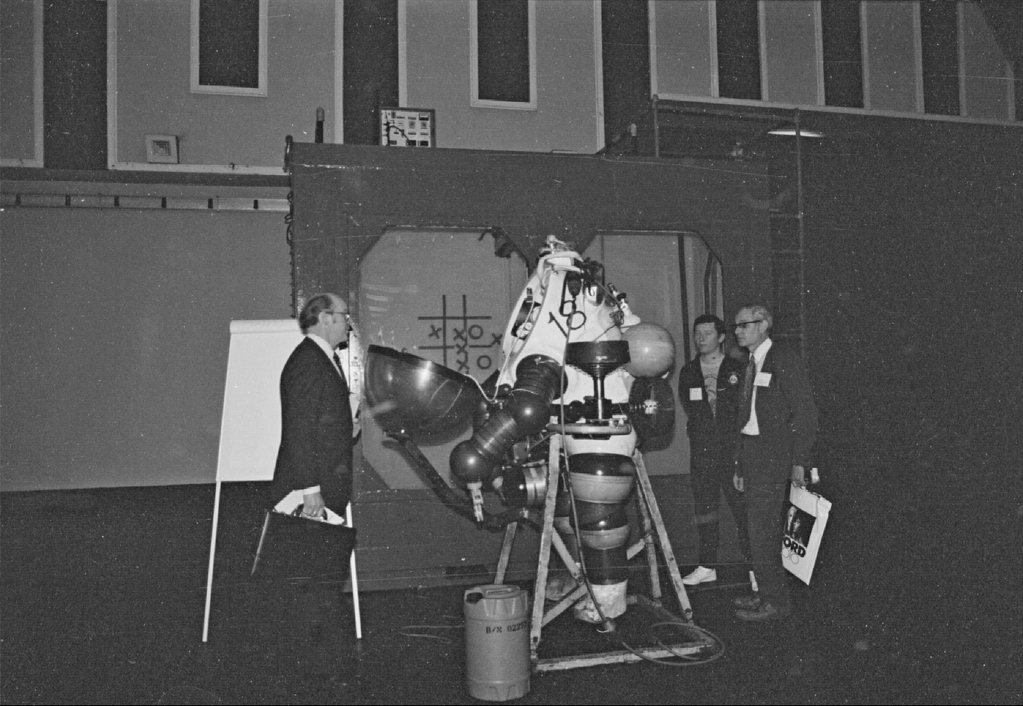 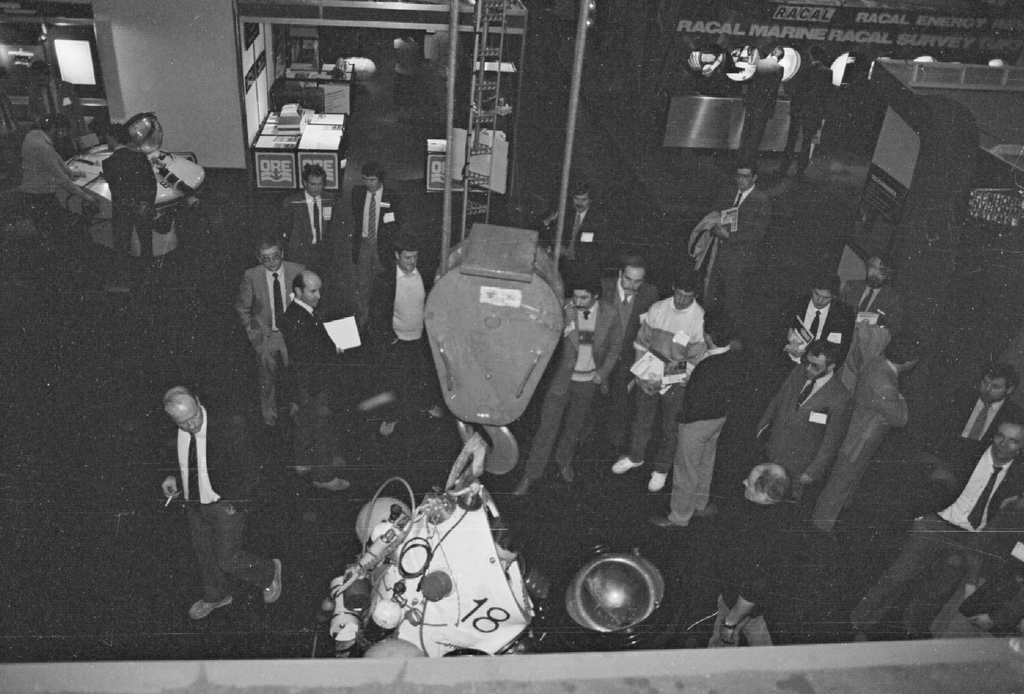 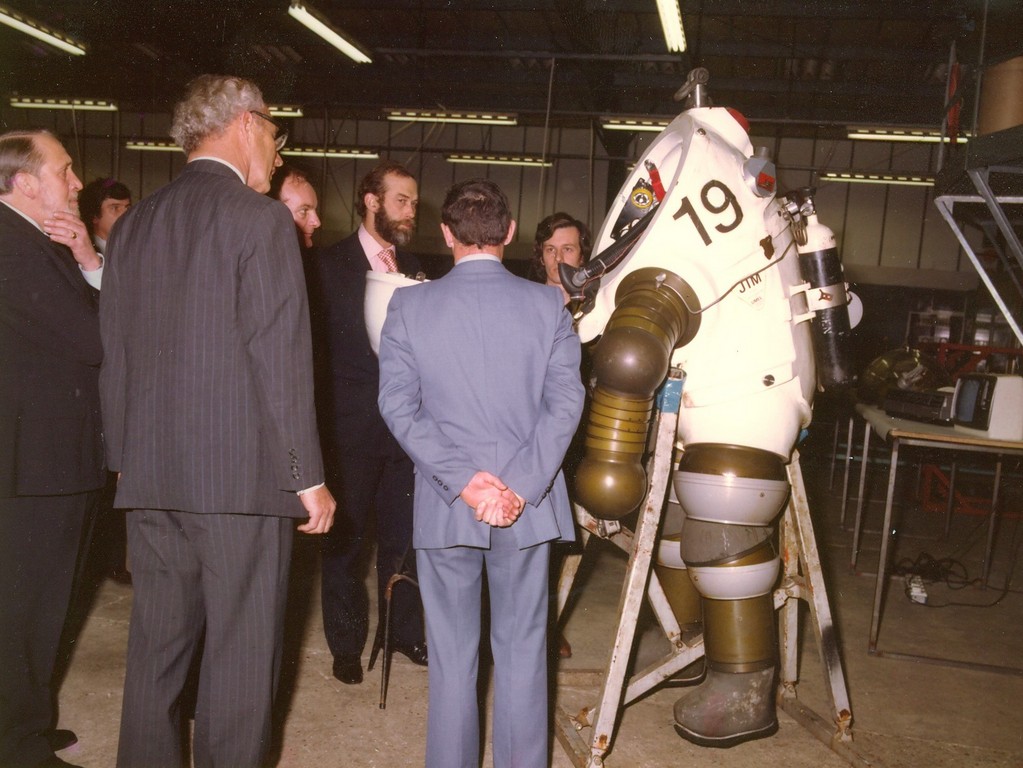 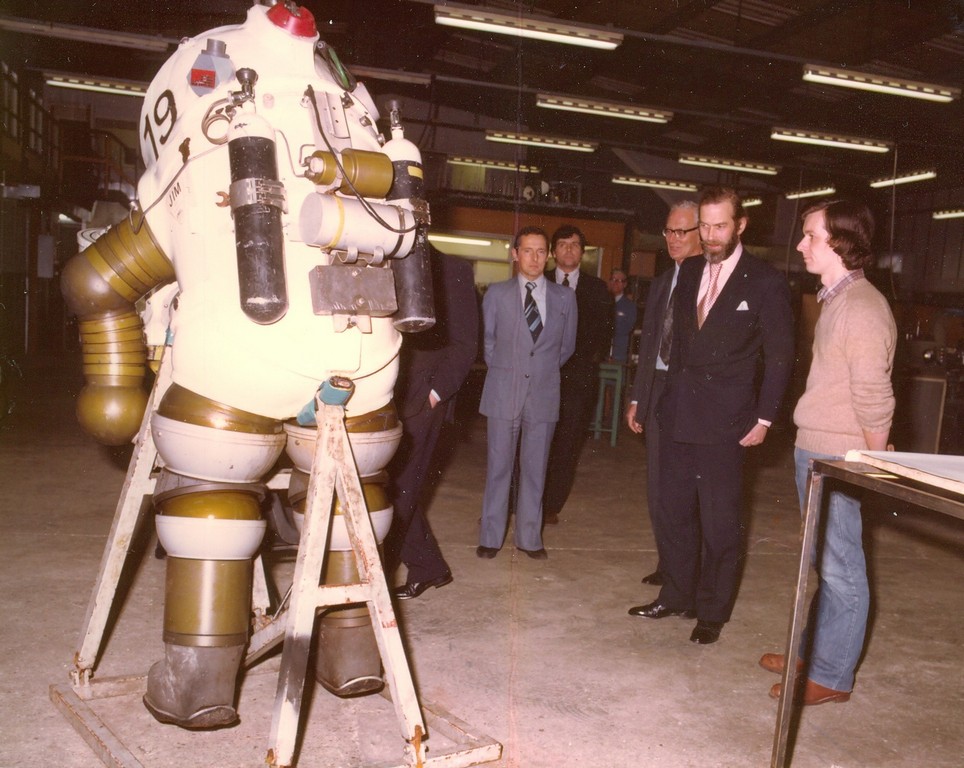 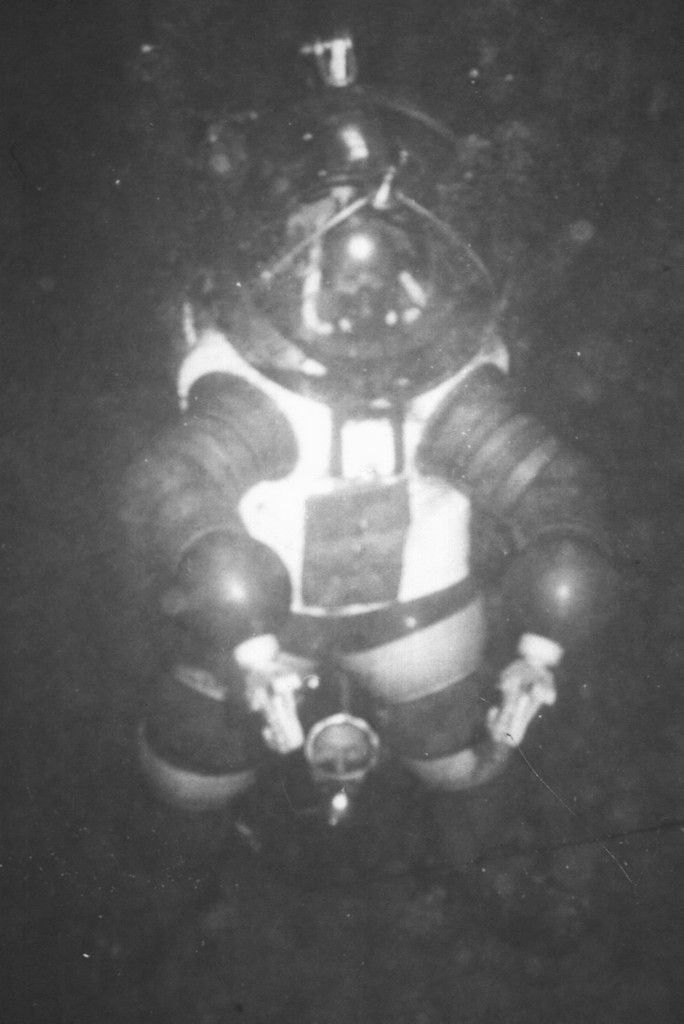 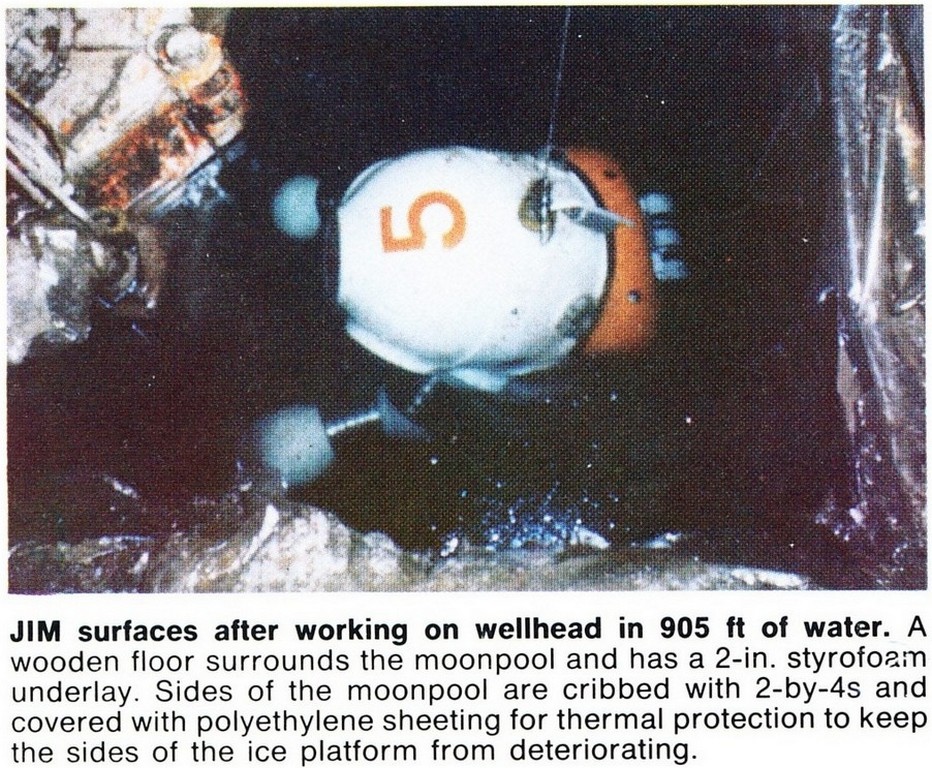 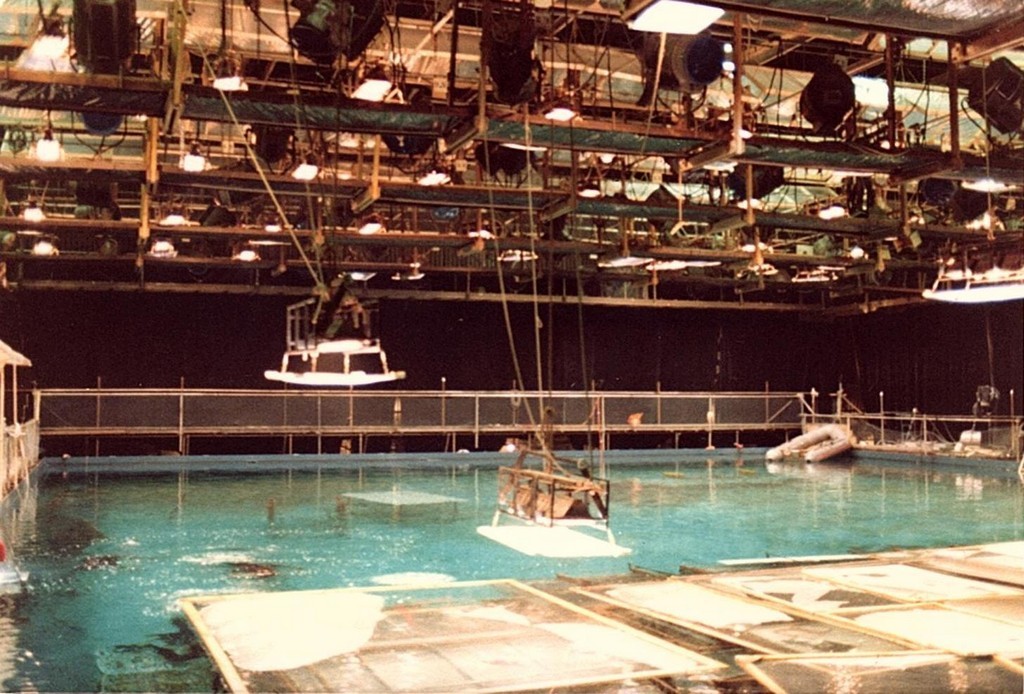 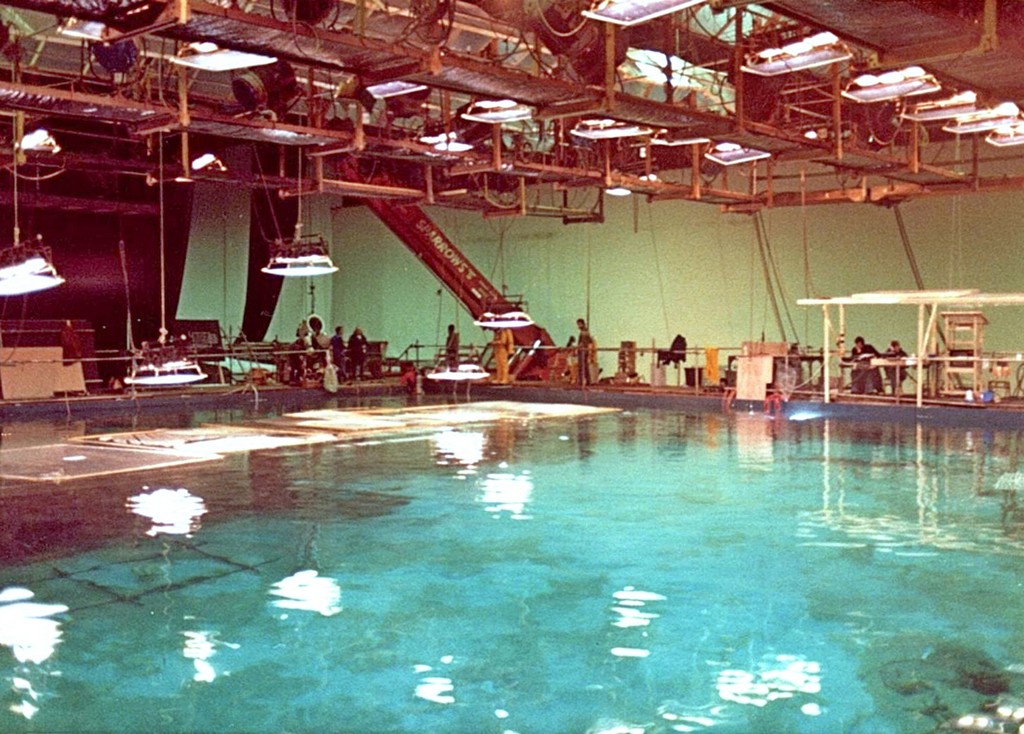 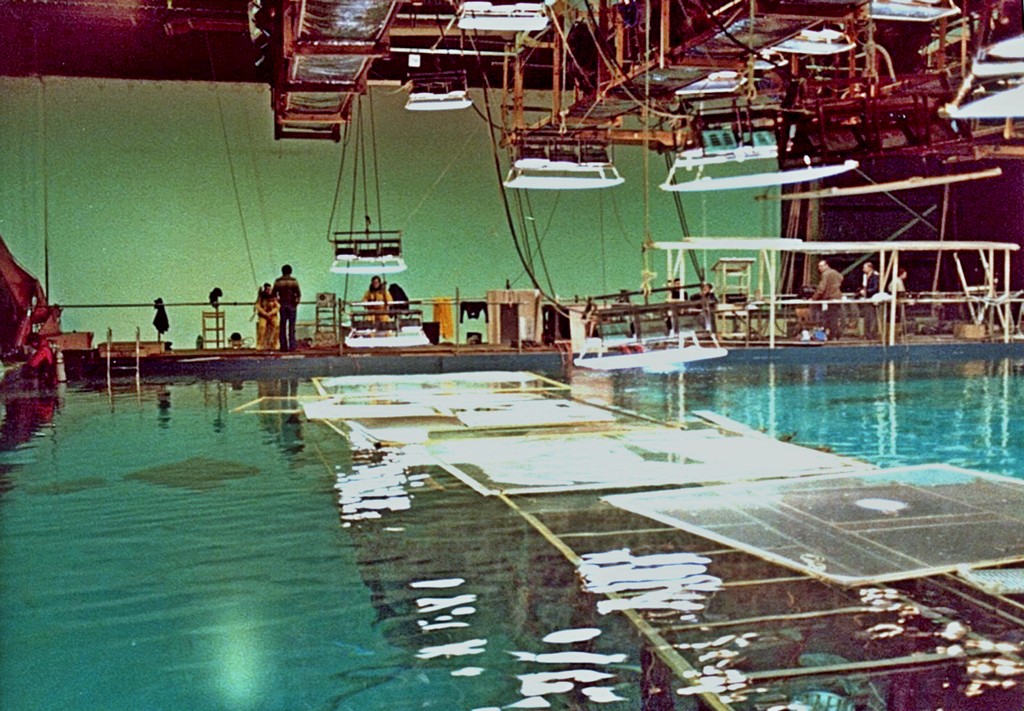 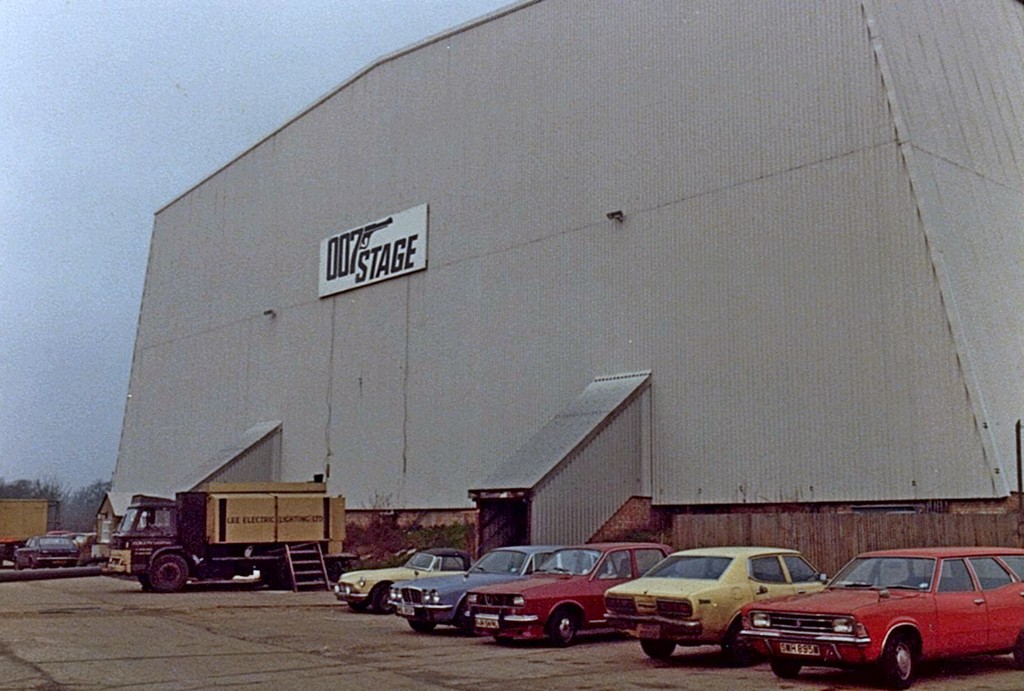 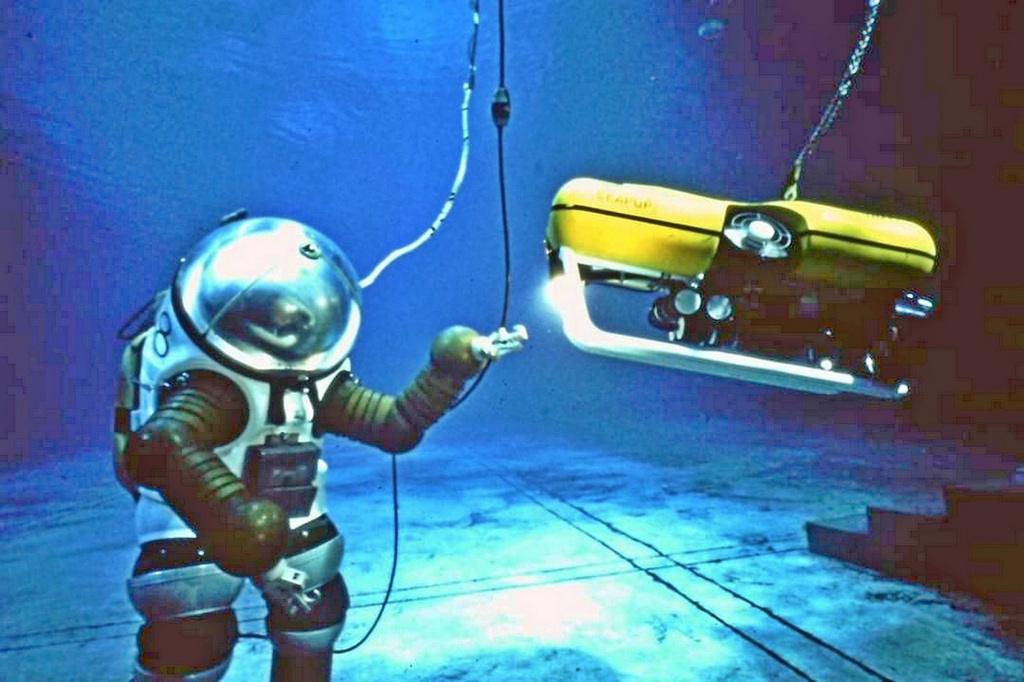 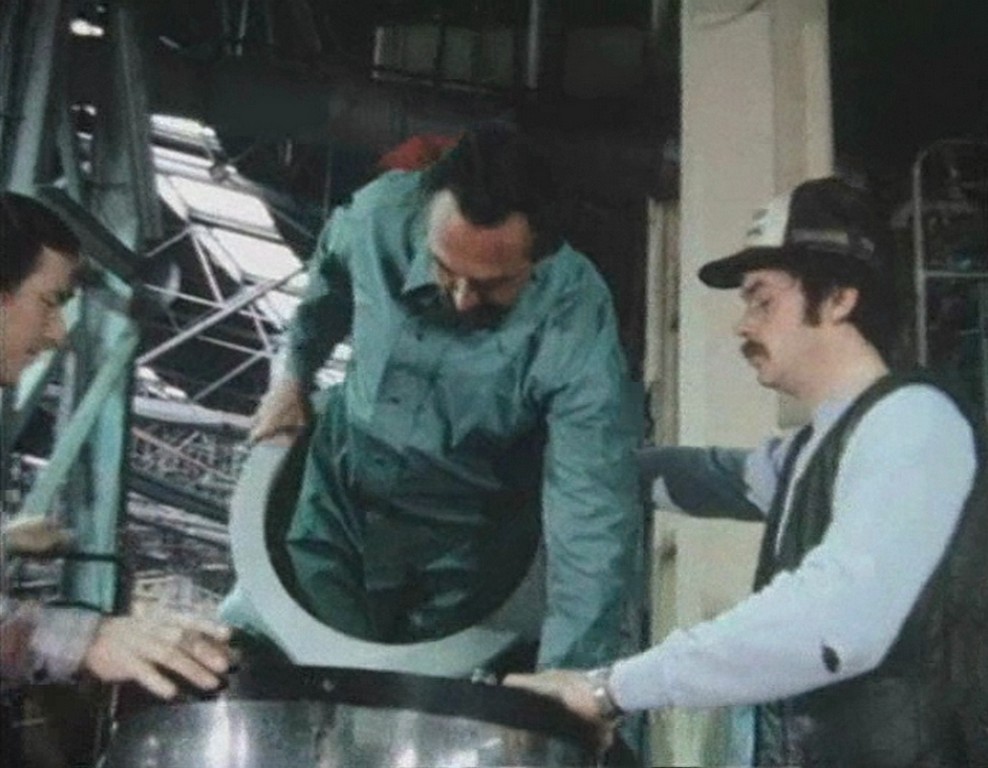 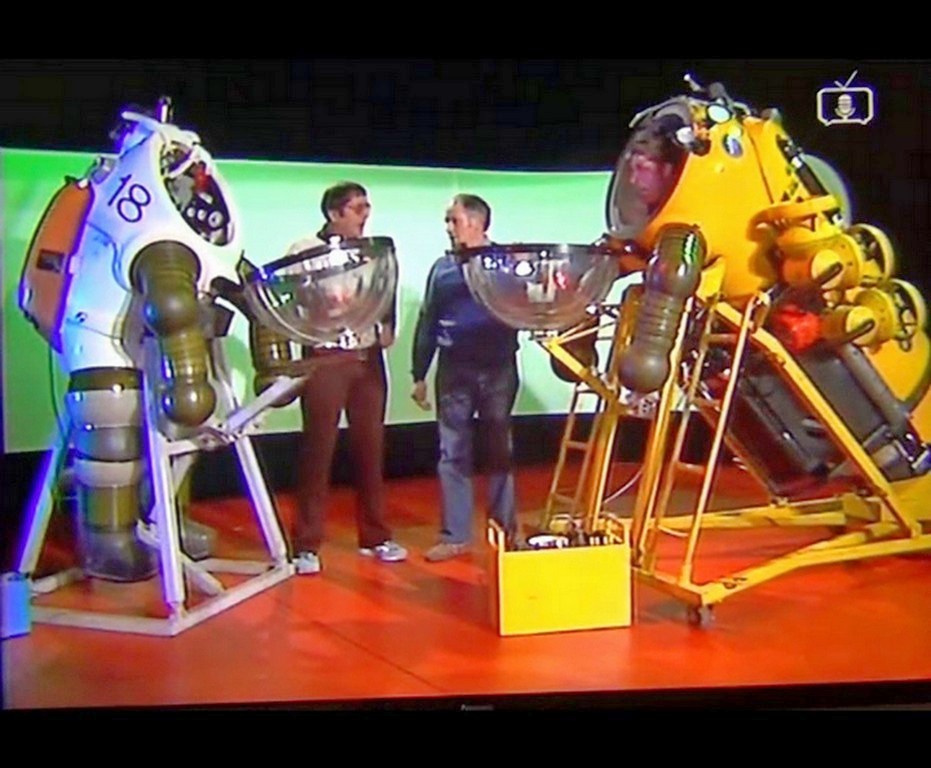 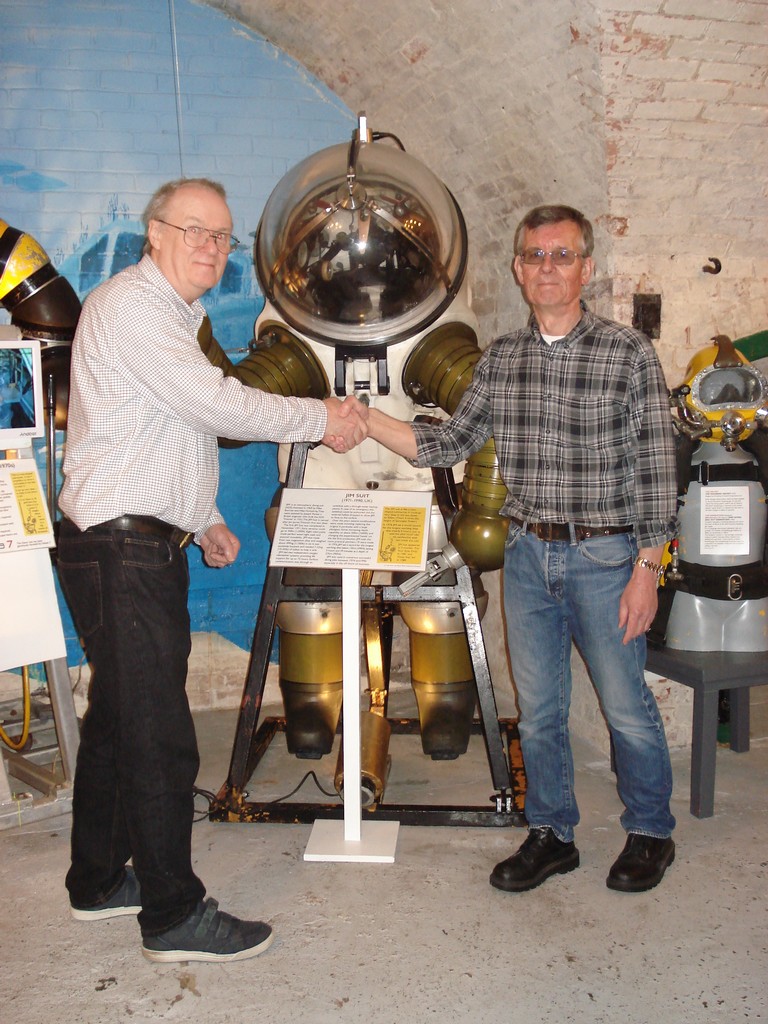