Since RNPL played a such a pivotal role in the history of diving, it really does merit a closer examination. It was, to say the least, a particularly quirky place to work – not exactly unusual though where innovation is concerned. So here is a bit more information about RNPL, along with an acknowledgment of its significant contribution to our understanding of the issues involved in deep diving. Once again that is taken from a personal perspective, actually very personal since several members of my family also worked there from time to time.

Below is a group picture of the staff when they were based at Peel Cottage, taken circa 1958. Val Hempleman, later to become superintendent, is seated in the front row, third from the left. 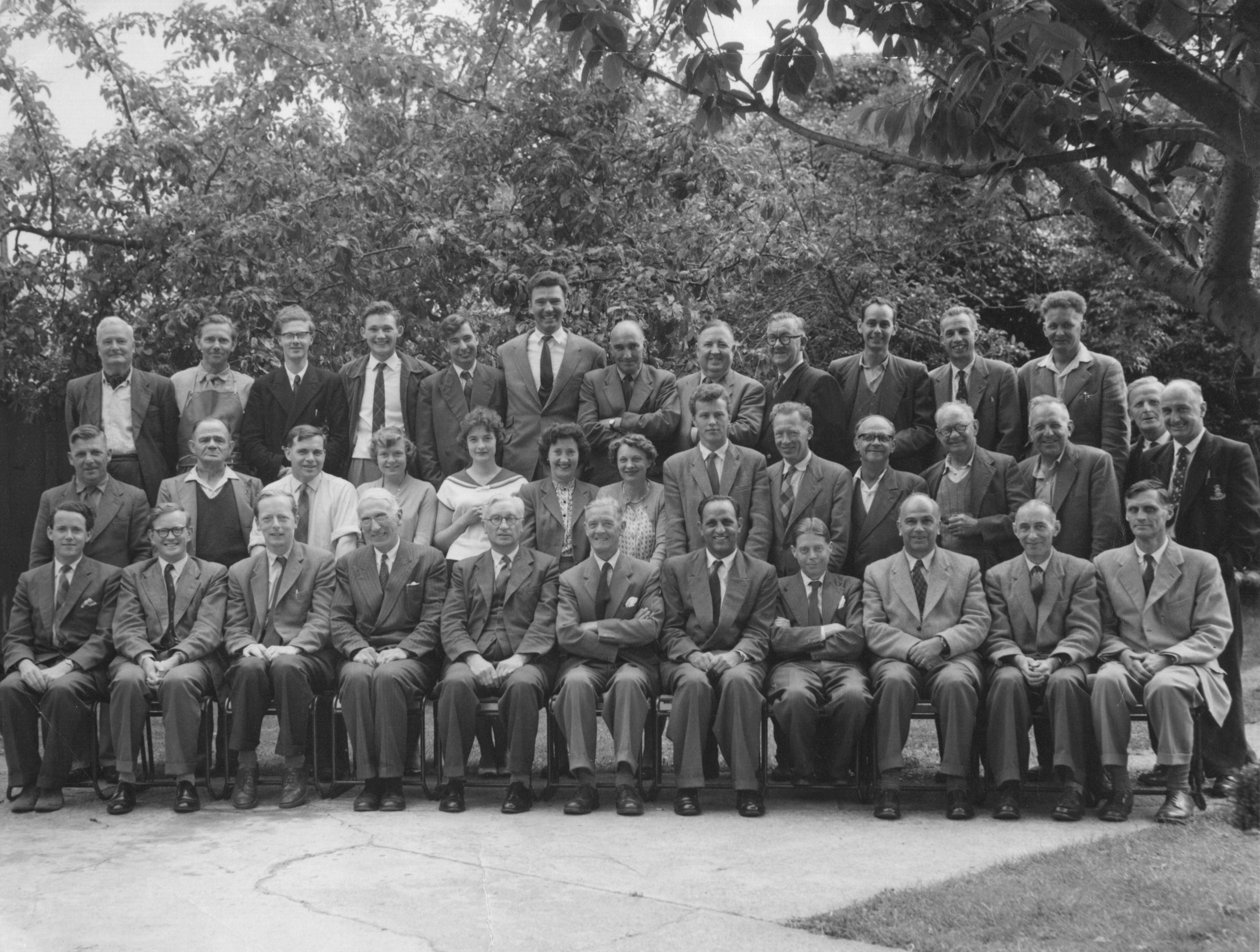 In 1942 RNPL was based in Clayhall Road, next to the Clayhall Royal Naval Cemetary. On the face of it the establishment appeared to be an ordinary house with a wooden front gate signed ‘Peel Cottage’. But behind the facade stood a number of buildings on a narrow strip of land stretching some distance down to Haslar Creek. It was therefore not exactly obvious what was going on in there.

Image 1 shows a workshop requisition for perspex mouthpieces designed by Sid Castle. These continued to be used in experiments for approximately another 10 years. Images 2 and 3 show Sid Castle (on the right) discussing future work. In image 4 Sid Castle can be seen in the workshop and image 5 shows another member of the workshop staff. Images 6 to 8 are of the RNPL exhibition at Portsmouth Navy Days, circa 1958. In fact, my own (baking powder diver) toys were ‘borrowed’ to enhance the display ... and that was the last I saw of them!

At this time the Fort Road site was occupied by the Torpedo Trials Base, Stokes Bay (part of HMS Vernon). Coincidently, my father-in-law (seen in image 9 and later on board ship in image 10) was actually stationed there (as Chief Ordnance Artificer) at various times between 1950 and 1955. Following the move to Fort Road the Navy continued to maintain a staff presence at RNPL until its closure. The purpose–built Deep Trials Unit can be seen in image 11. It was staffed largely by serving and ex-Naval personnel with Lt Cdr Bill Filer, aka ‘Uncle Bill’, in charge. Bill appears in image 12, front row, fourth from right. 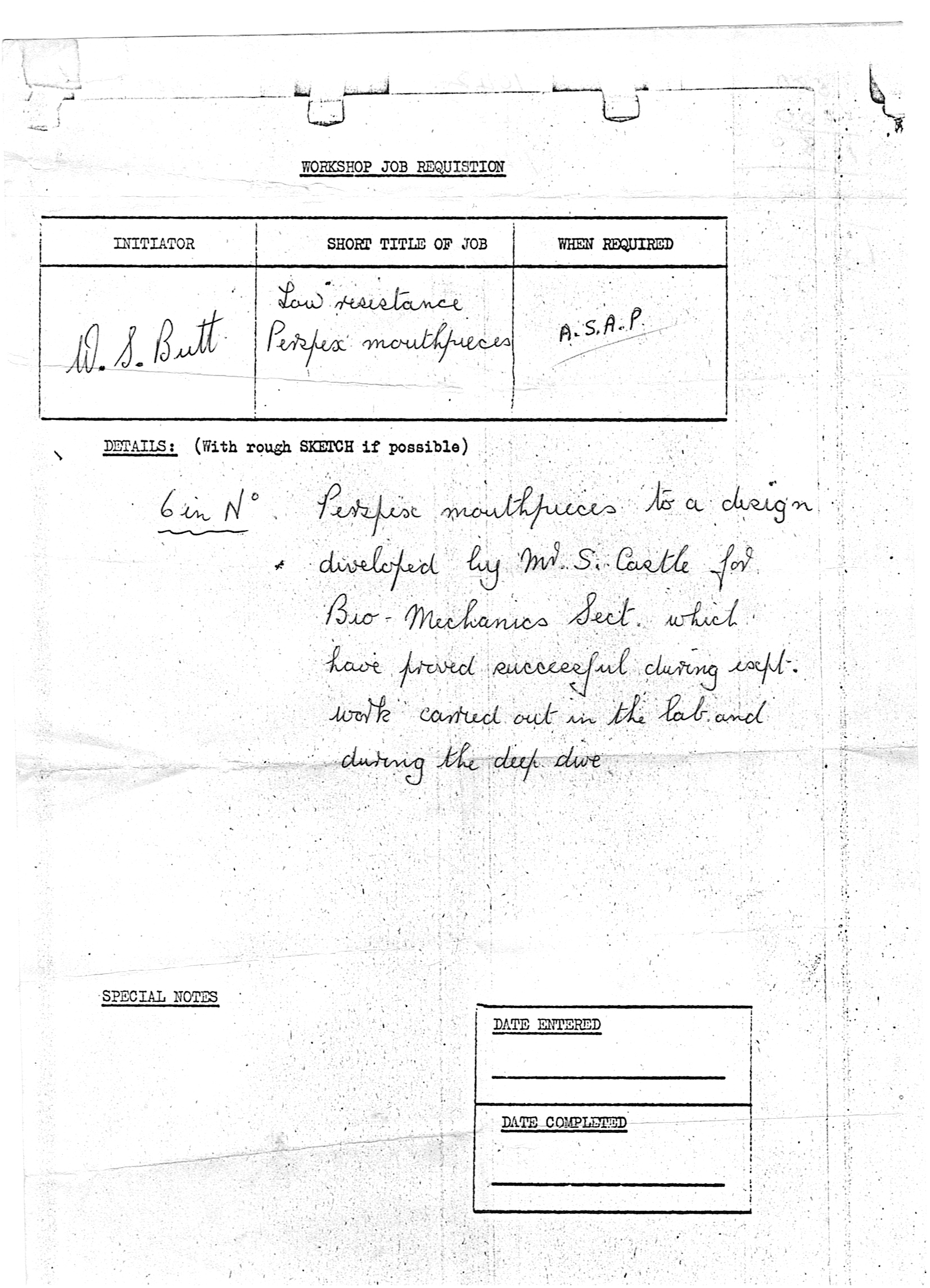 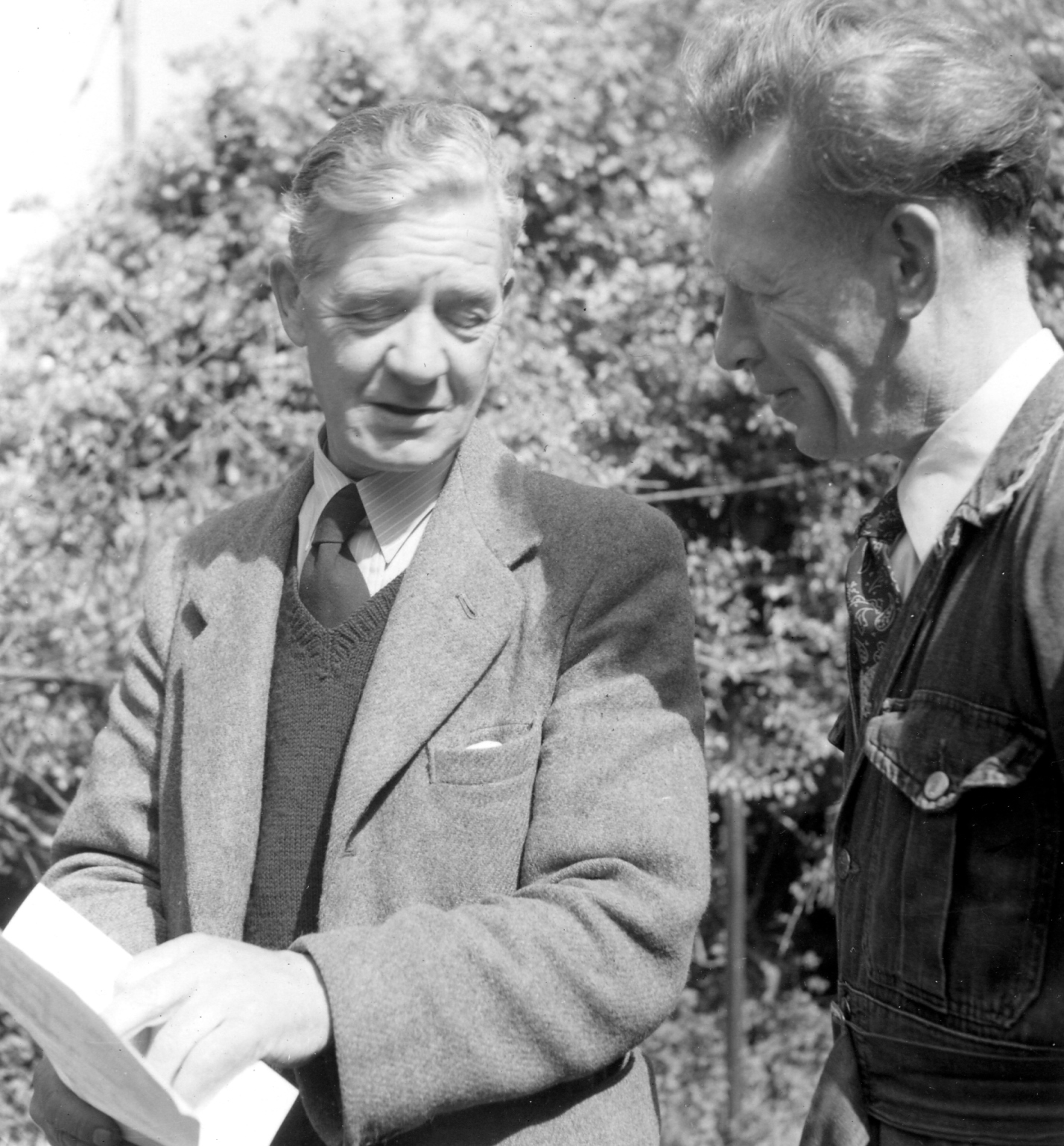 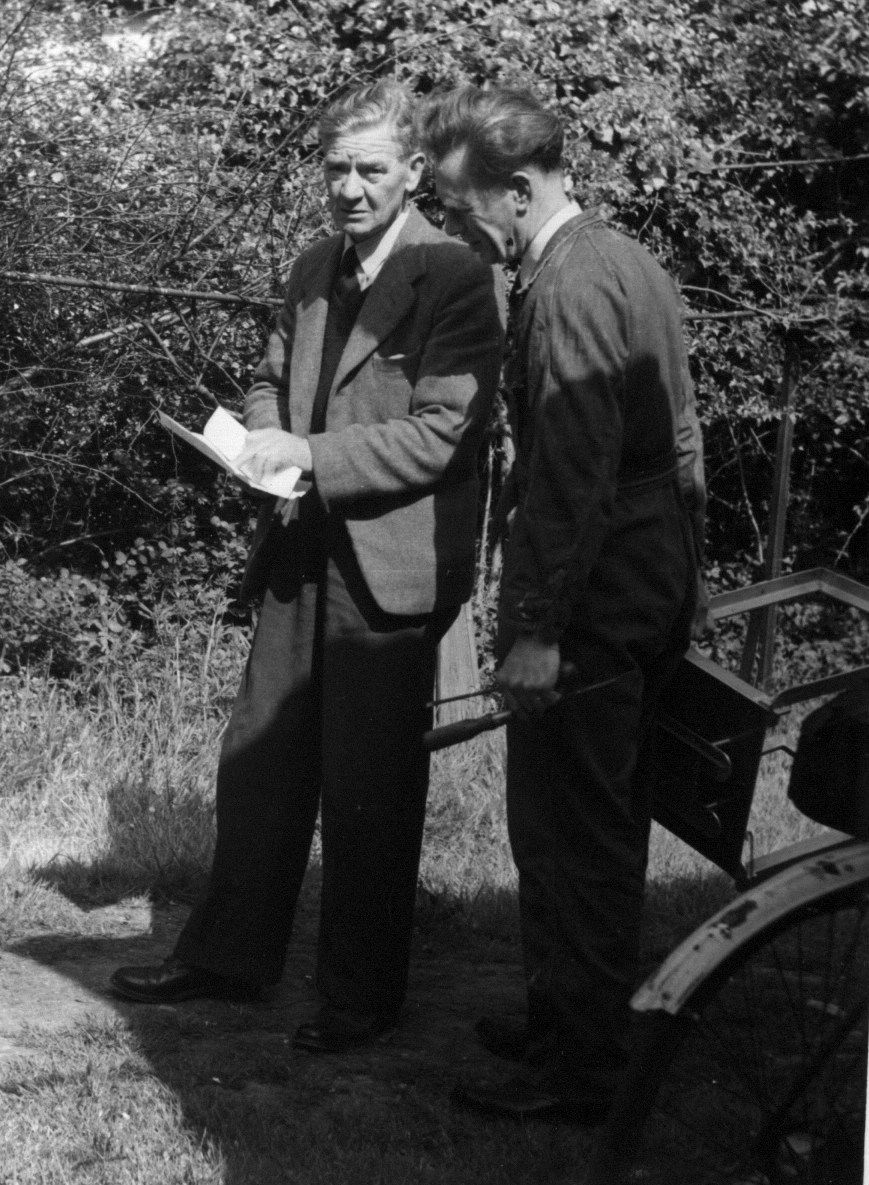 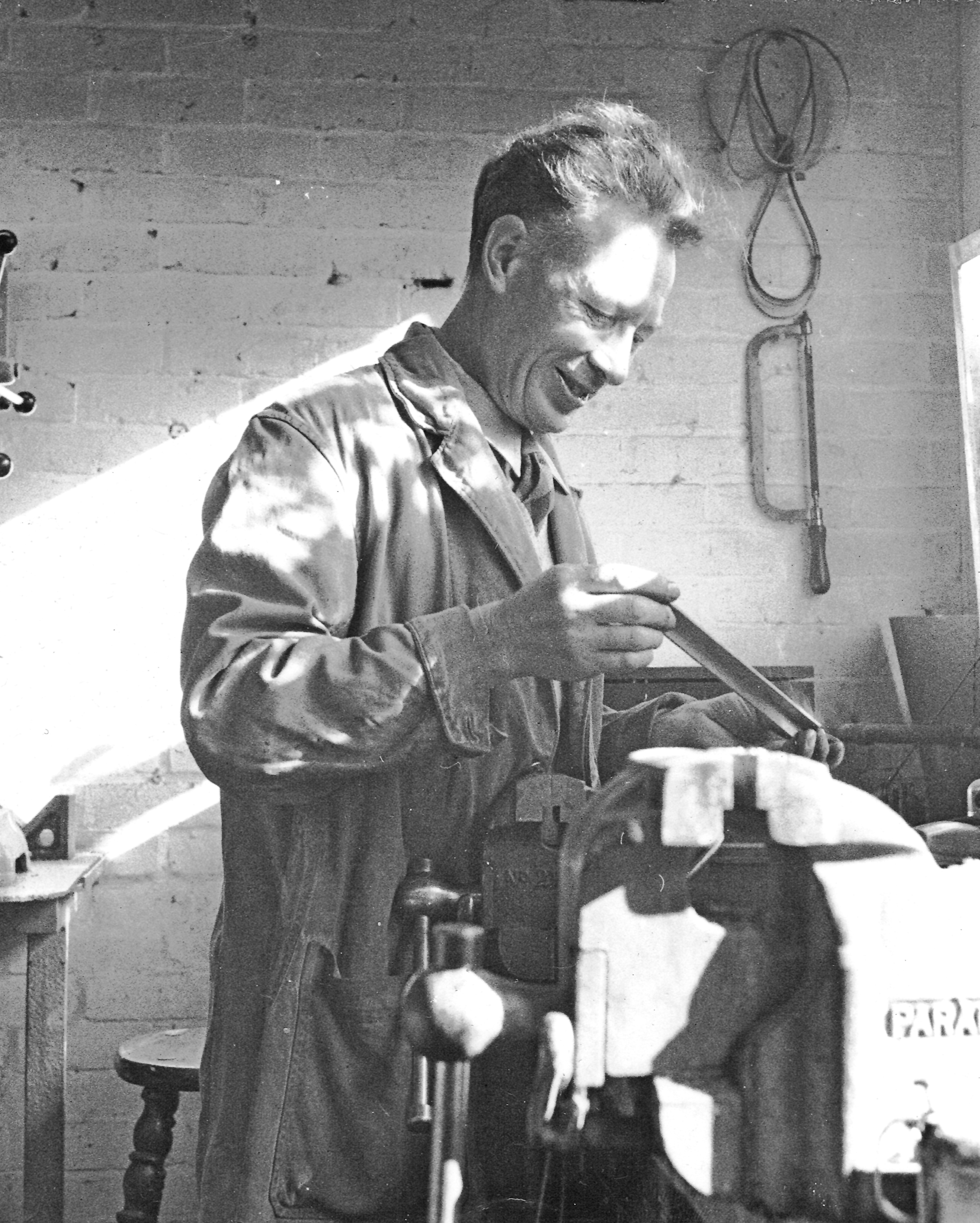 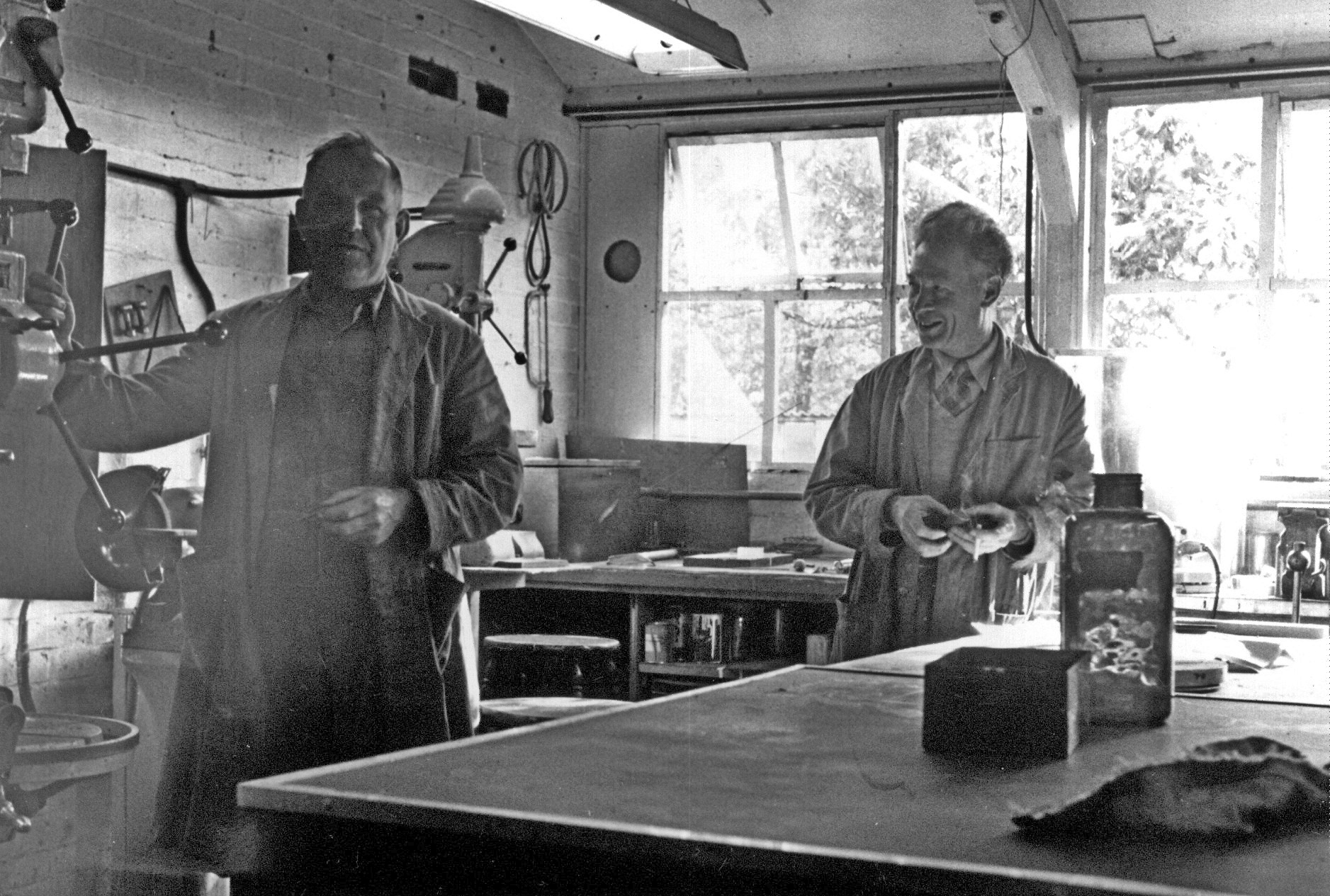 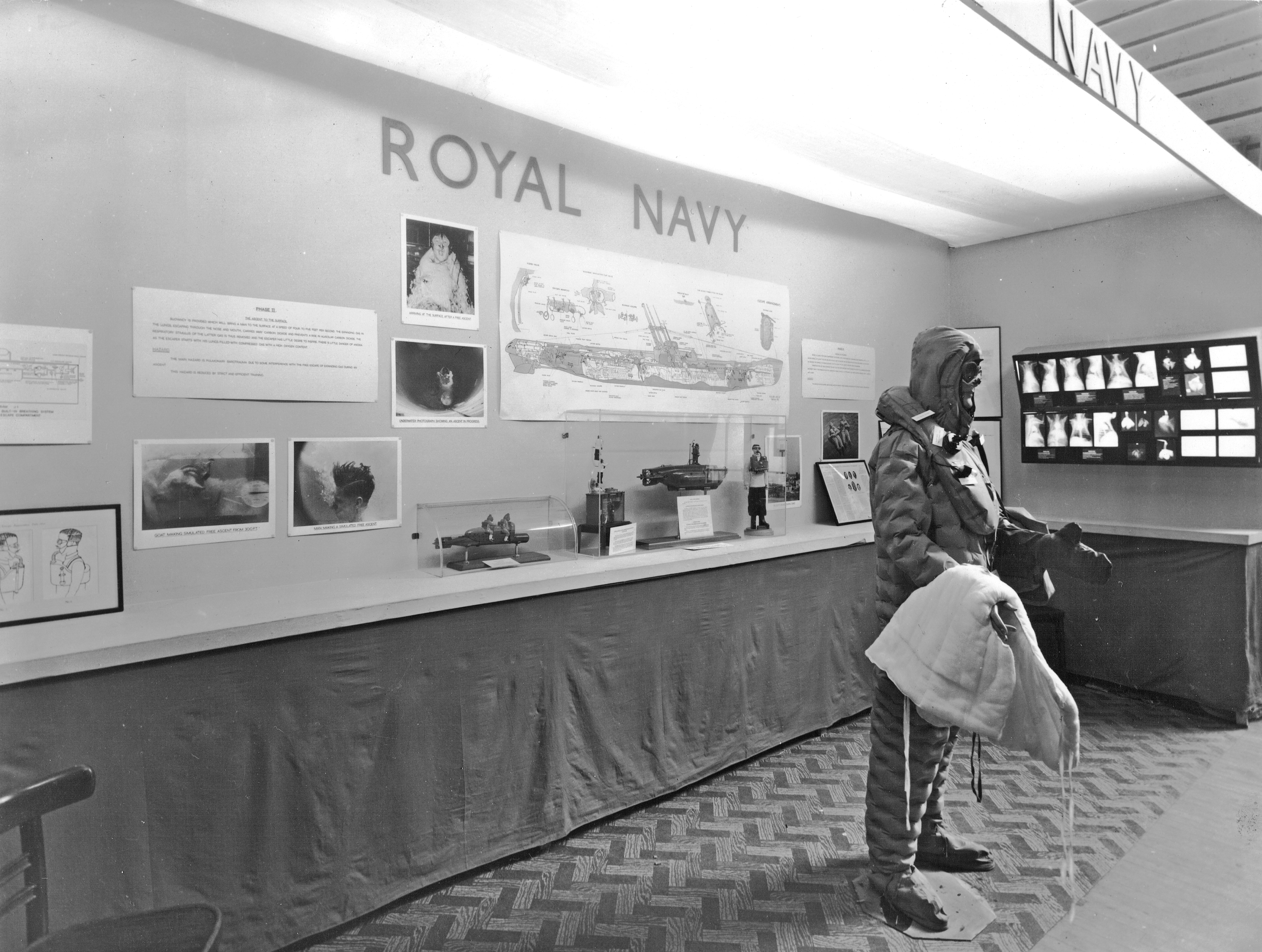 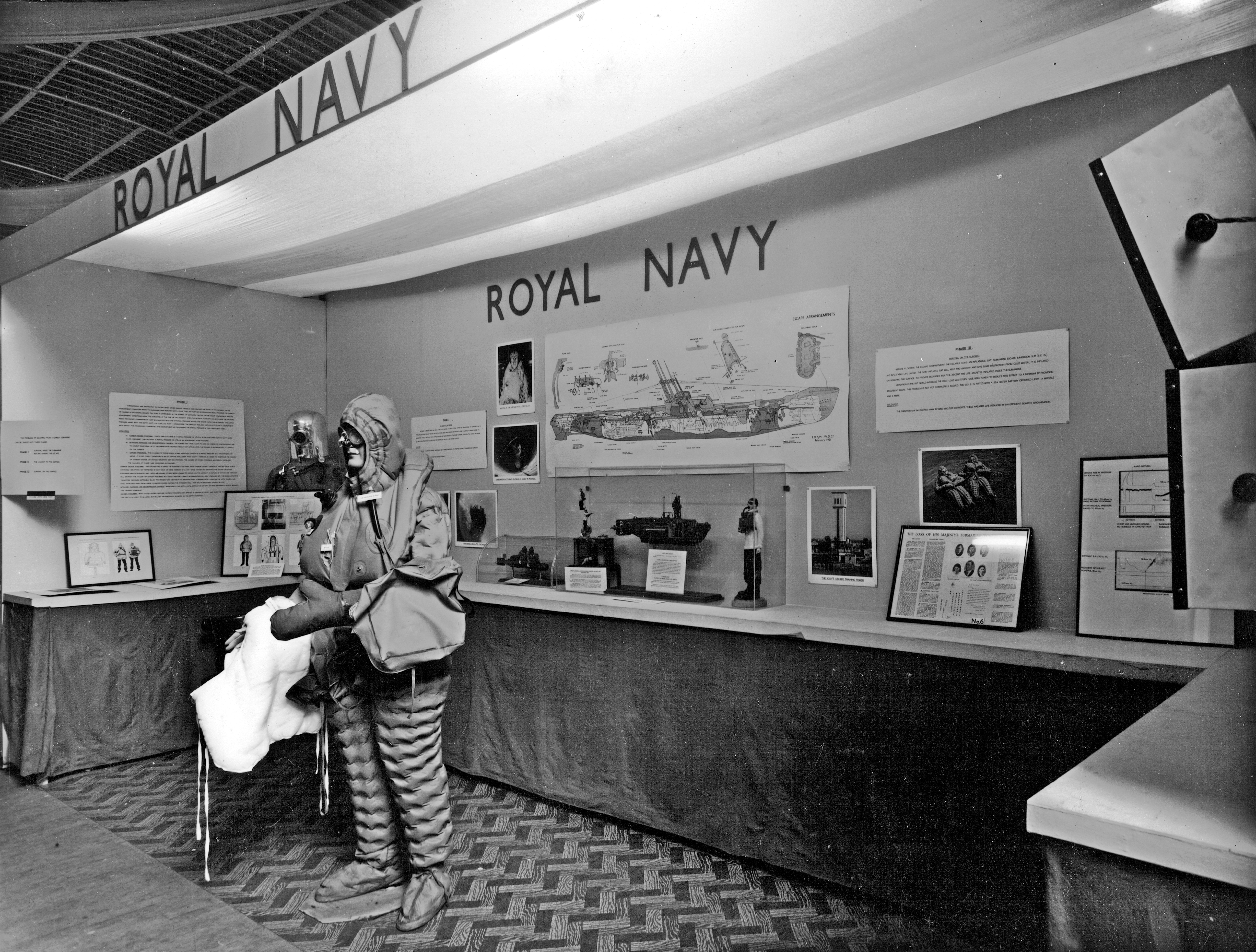 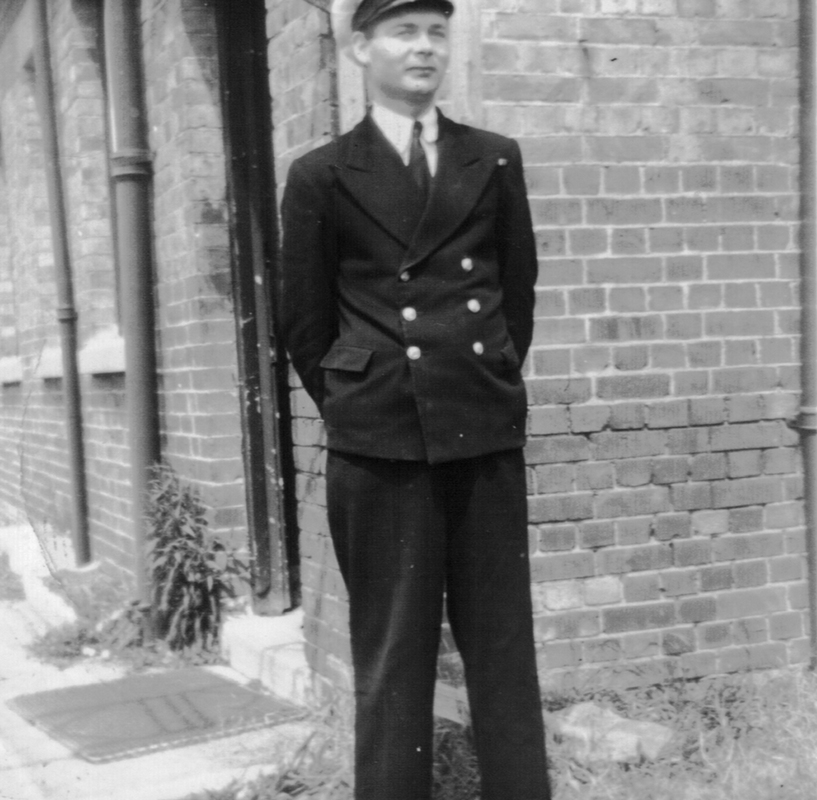 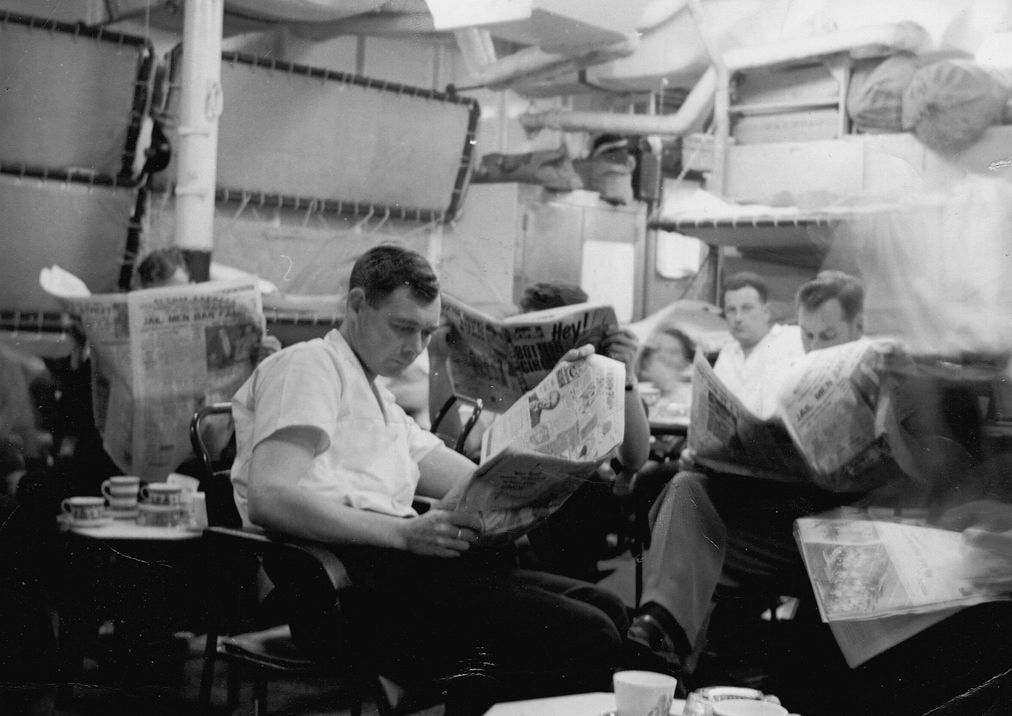 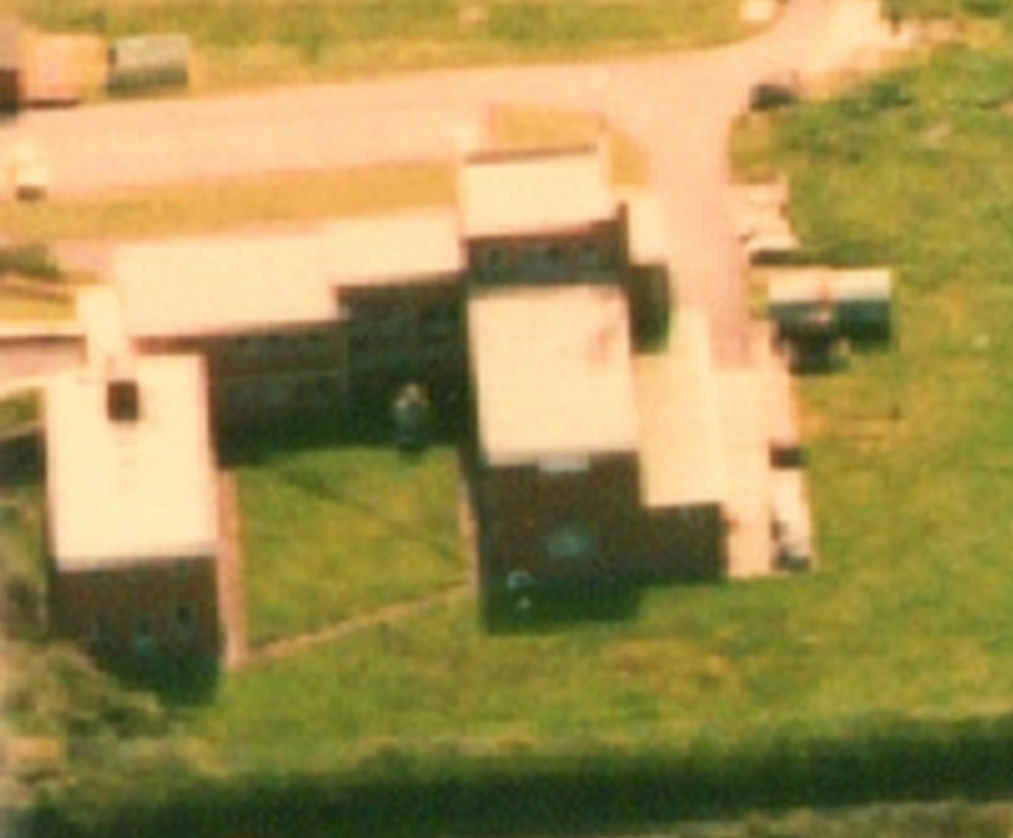 RNPL was relocated to Fort Road, Alverstoke, Gosport on the western side of Portsmouth Harbour in the early 1960s. In 1977 it became known as AMTE (PL) (Admiralty Marine Technology Establishment (Physiological Laboratory)) and then in 1984 ARE (PL) (Admiralty Research Establishment and Human Factors Department (Physiological Laboratory)) followed by several other ‘reincarnations’. Scientists and technicians carried out research into the physiological effects of diving, thus improving the efficiency, health and safety of underwater work.

RNPL worked in association with other organisations involved in hyperbaric physiology, both within the MOD (such as the Experimental Diving Unit and the Institute of Naval Medicine) and outside the MOD (such as the Underwater Engineering Group and the Medical Research Council). There was also close co–operation with several universities (Oxford, Cambridge, London, Newcastle, Salford) and hospitals (such as King's College, the Royal Orthopaedic and The Middlesex). The main areas of responsibility are described below.

For example, emergency life support machinery in the form of the manually operated Carbon Dioxide scrubbing system. This was primarily designed for the stricken submarine but had many non military applications. Work was also carried out into the signal detecting ability of Sonar operators during long operational periods.

Associated problems were also investigated and the laboratory carried out much pioneering work on ‘JIM’, the atmospheric diving suit e.g. the ability of ADS operators to survive for long periods without surface support.

Research was directed towards the use of various gas mixtures for extending the escape depth and with the problems of being rescued by a submersible when the striken submarine is over-pressurised.

Involved investigations into the numerous effects of breating gas mixtures at raised pressures. The laboratory produced multiple excursion air diving tables Trimix tables and Helium tables for deep saturation diving. In fact, the laboratory held the world record for deep diving with a dive to 660 m (2165 ft) in November-December, 1980.

Into the ability of divers to combat the cold in adverse conditions such as the ‘lost bell’ situation when all surface support in the form of heating and communication is broken off.

In association with AMTE(EDU) to ensure that beathing equipment would be able to provide the diver with all their requirements over a wide range of workloads.

The establishment also contained laboratory support sections i.e. Electronics, Workshop, Photographic and other administrative facilities such as a Library and Naval Stores. In essence, RNPL was involved in all aspects of the physiology and medicine of diving and had unique facilities to ensure that a high standard of research was maintained over a wide range of disciplines.

[...] It is interesting that you mention the old Clay hall [sic] site as I visited there quite a few times when I was at the old Gosport Grammar school. In my lower 6th time I was determined to do Chemistry and had a place at UC in London to go there. I was trying to make an improved reagent to detect Mg… vain youthful conceit. My Chemistry master Dr Ron Page suggested I have a look at the library at Clay Hall [sic] and I called at the lab and met the then superintendent who was Taylor if I remember rightly. I was made most welcome and revisited many times to use the library. I never thought that a long way down the road I would renounce Chemistry, take up medicine (at Kings instead of UC) and end up working one day at RNPL across the road! That came about by accident as I was walking past the lab one day and casually asked if I could look round and was taken aside by Val Hempleman who asked me if I was interested in coming to do some diving physiology! I said I could come 3 months later when my surgical job finished and I turned upon the 1st of April and started only to find that Val had not done the paper work and I had not filled in the necessary forms or given me an interview! I remember Pat Baker telling me ‘not to worry’. Those little things all got sorted after a few months! By then of course the old grammar school had gone and the new comprehensive was at Bay House!

In order to reflect individual needs (or that of the establishment) from time to time staffing had undergone some fundamental changes. However, many people started to leave RNPL around the mid 1980s when under ‘rationalisation’ much of the practical research appeared to be coming to an end. A short time later, the observation of Cox (1989) really did underline the evolving situation ‘Research programmes at the Admiralty Research Establishment have been cut back almost to the point of extinction’. Although there had been gradual reassignments to other areas of the MOD, or to its rapidly developing support agencies, many people chose to pursue other opportunities e.g. in commercial diving, the maritime industry, the computer industry or academia.

Granted, the various acronyms relating to RNPL can all be rather confusing, but the following link: Dstl‘s history helps to explain a bit more about the evolution of what eventually became the Defence, Science and Technology Laboratory, an executive agency of the Ministry of Defence (MOD). 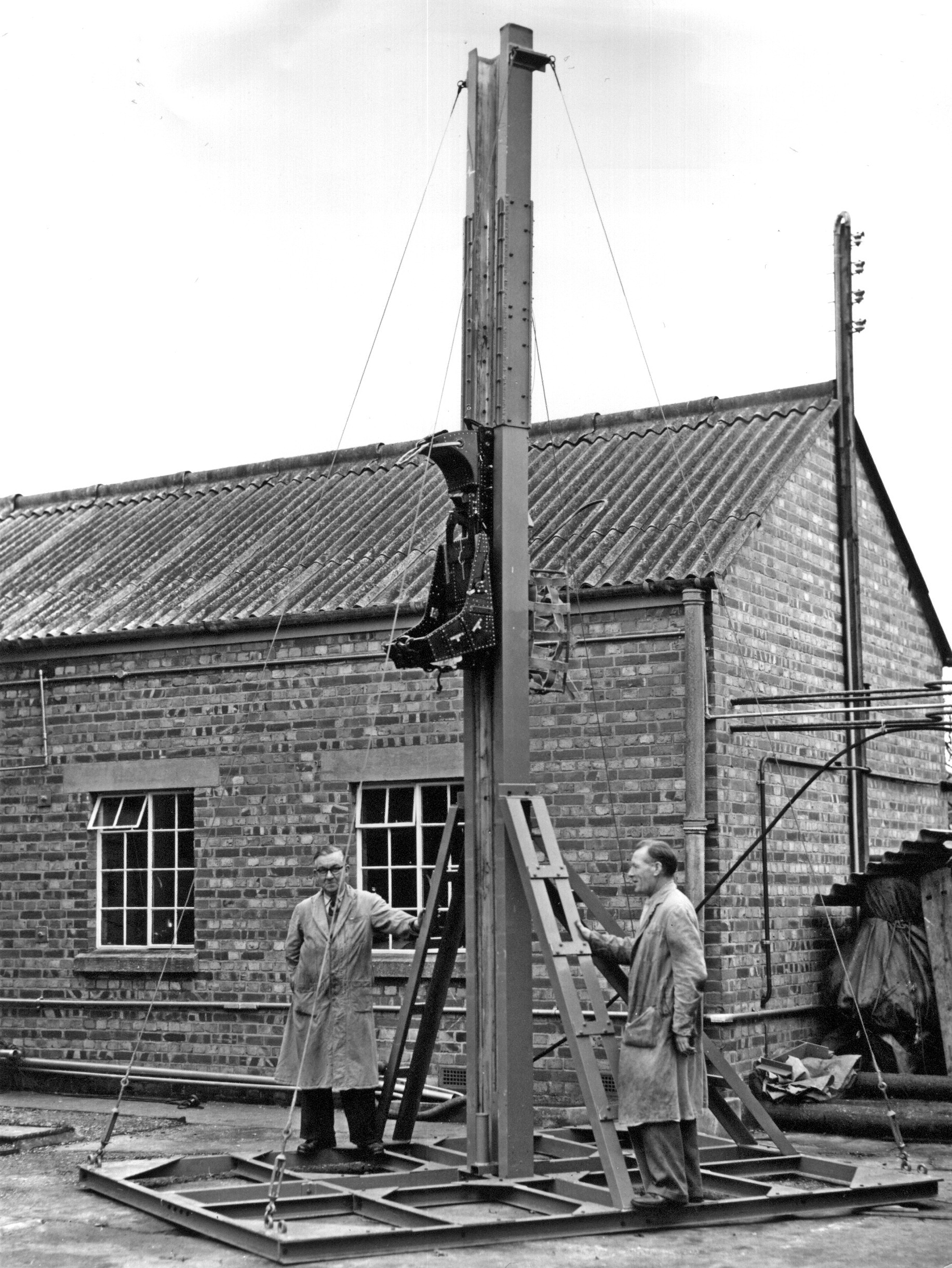 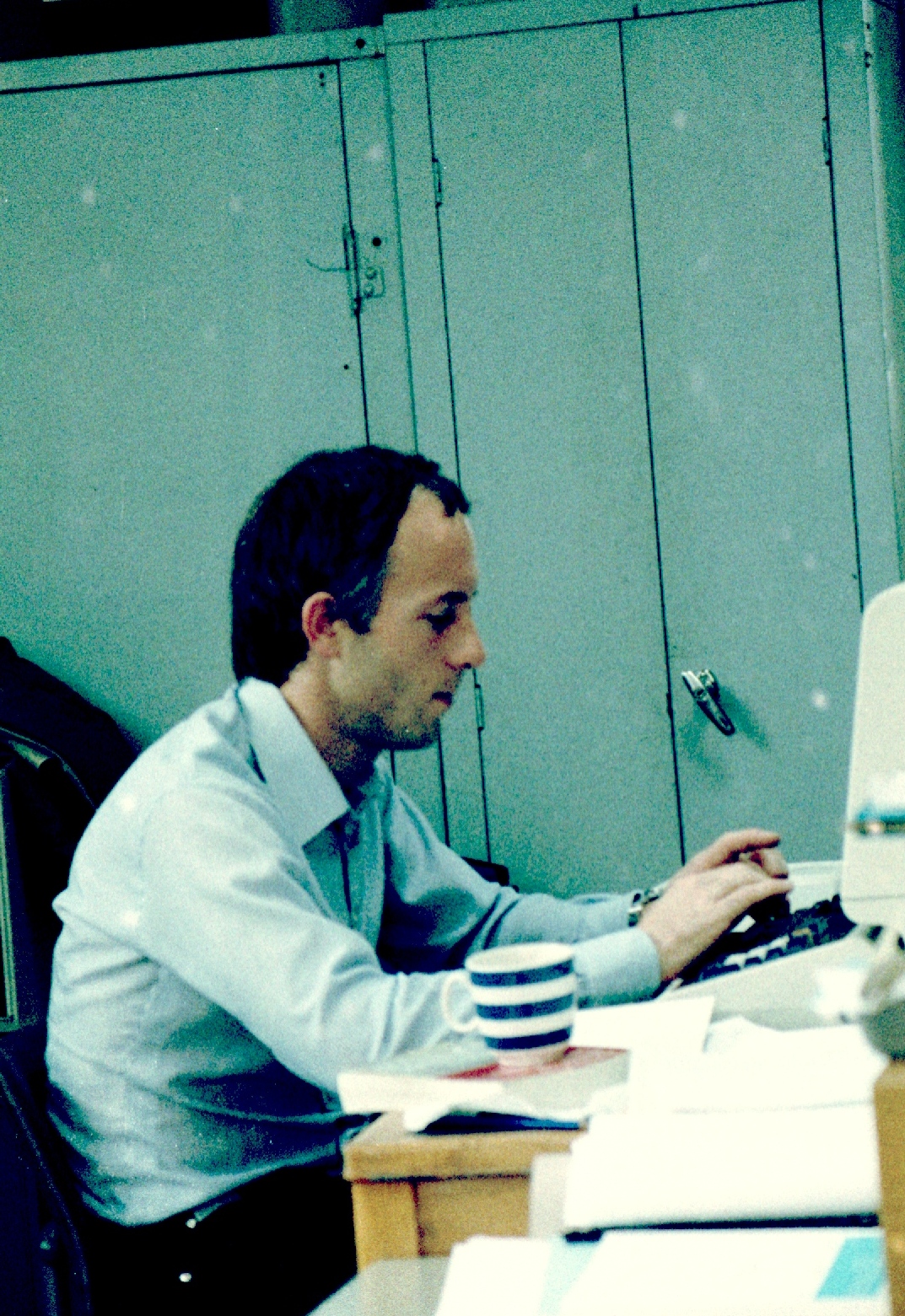 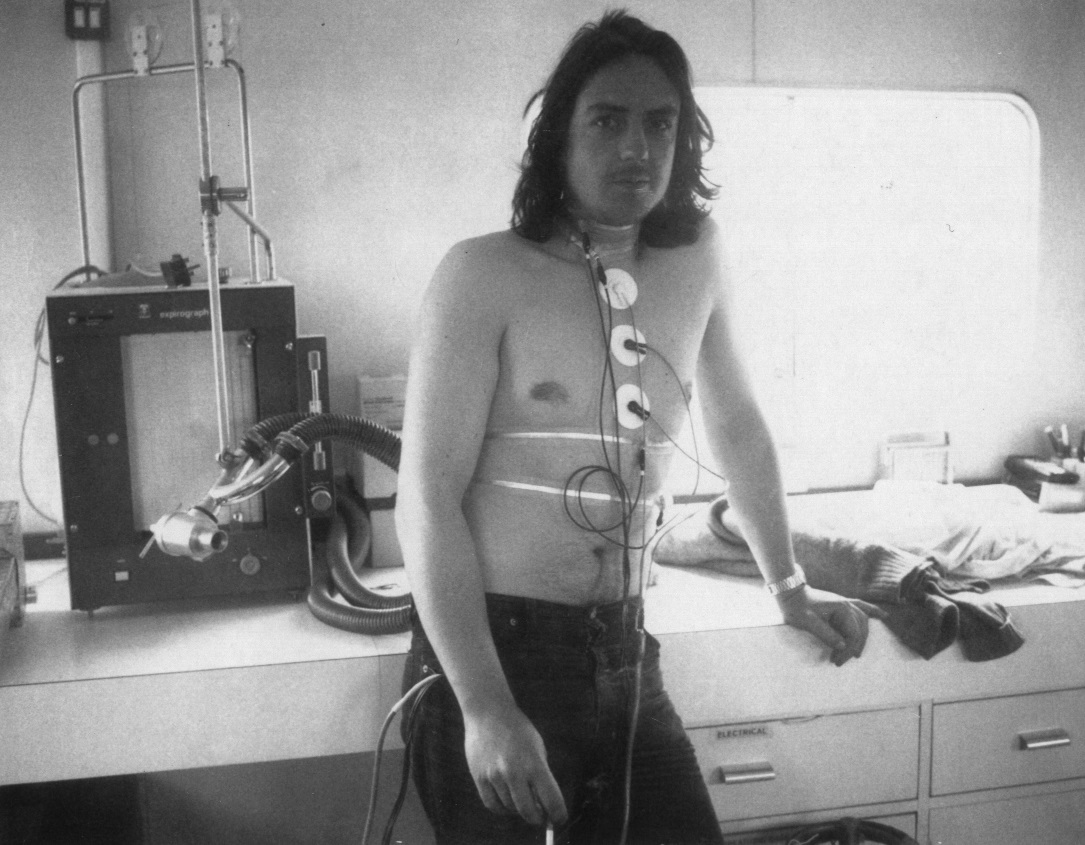 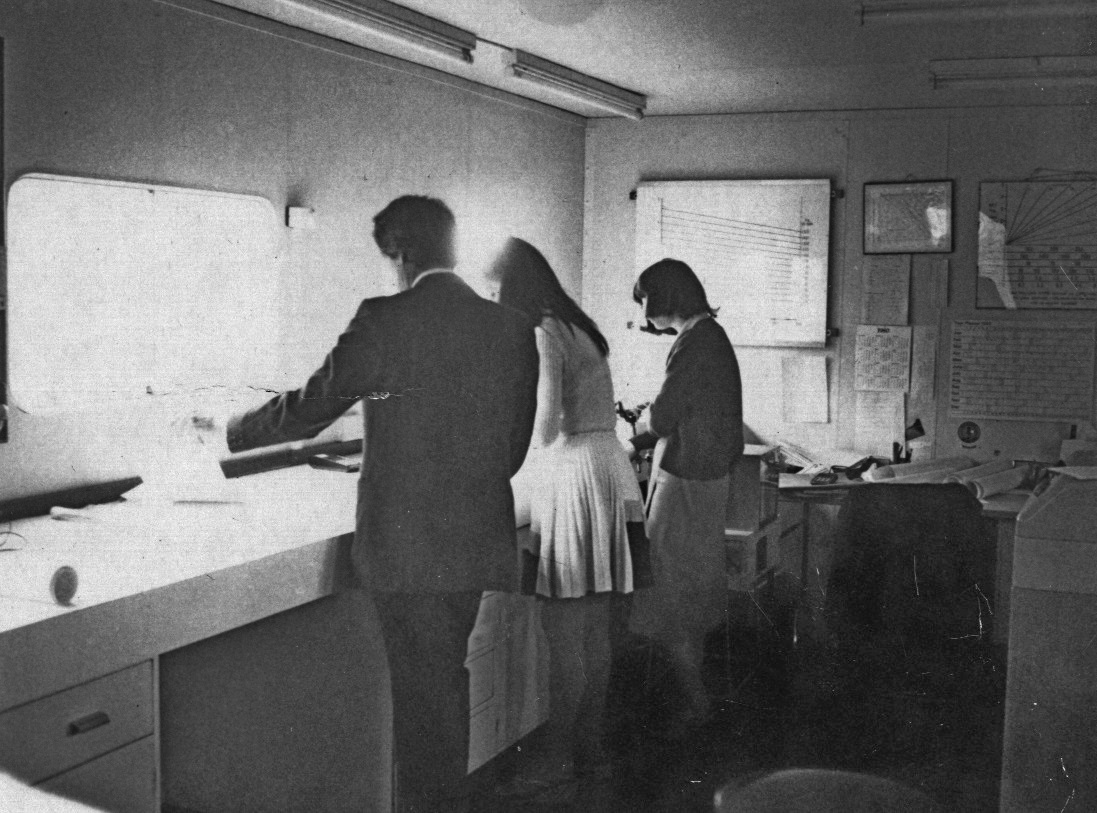 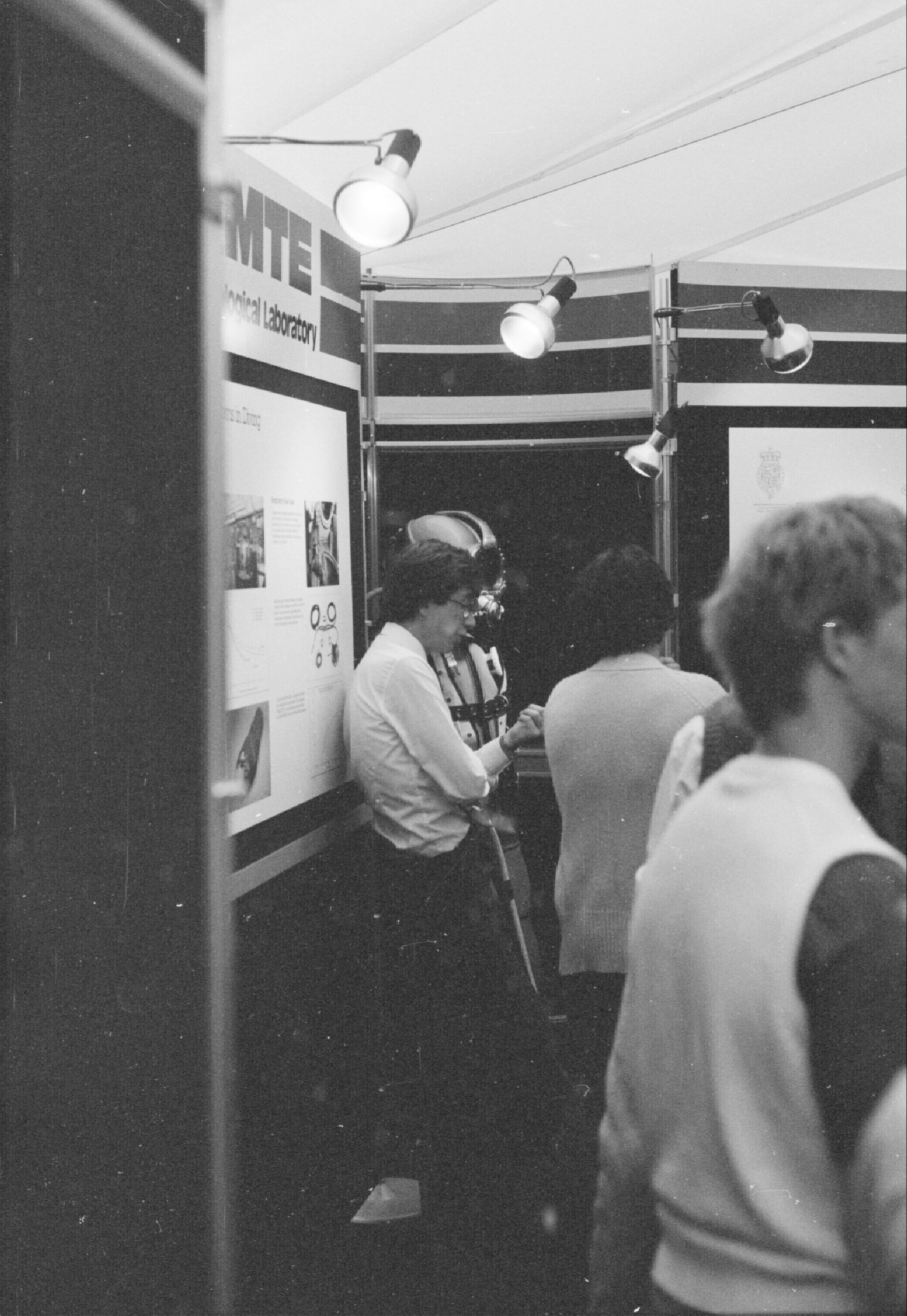 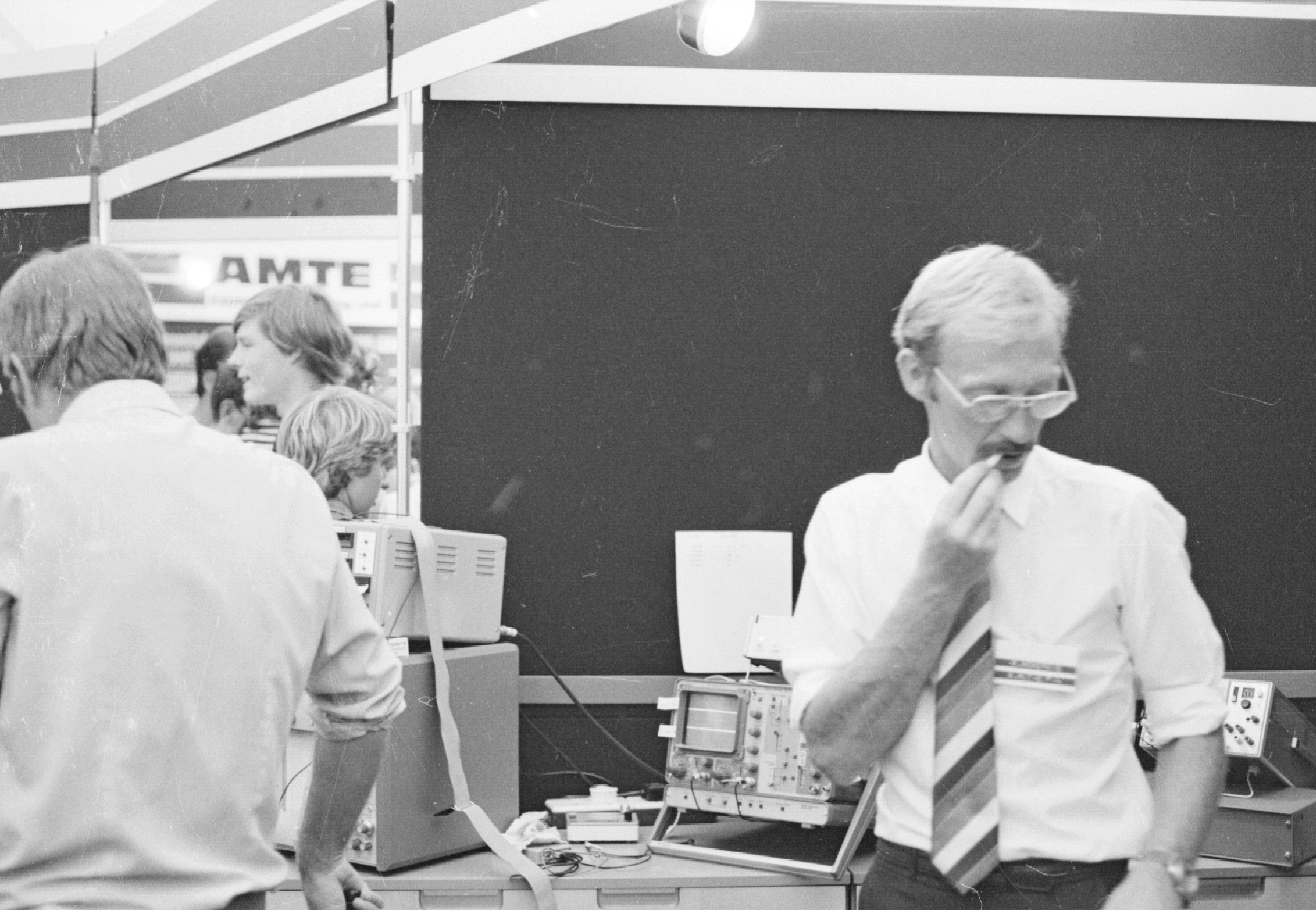 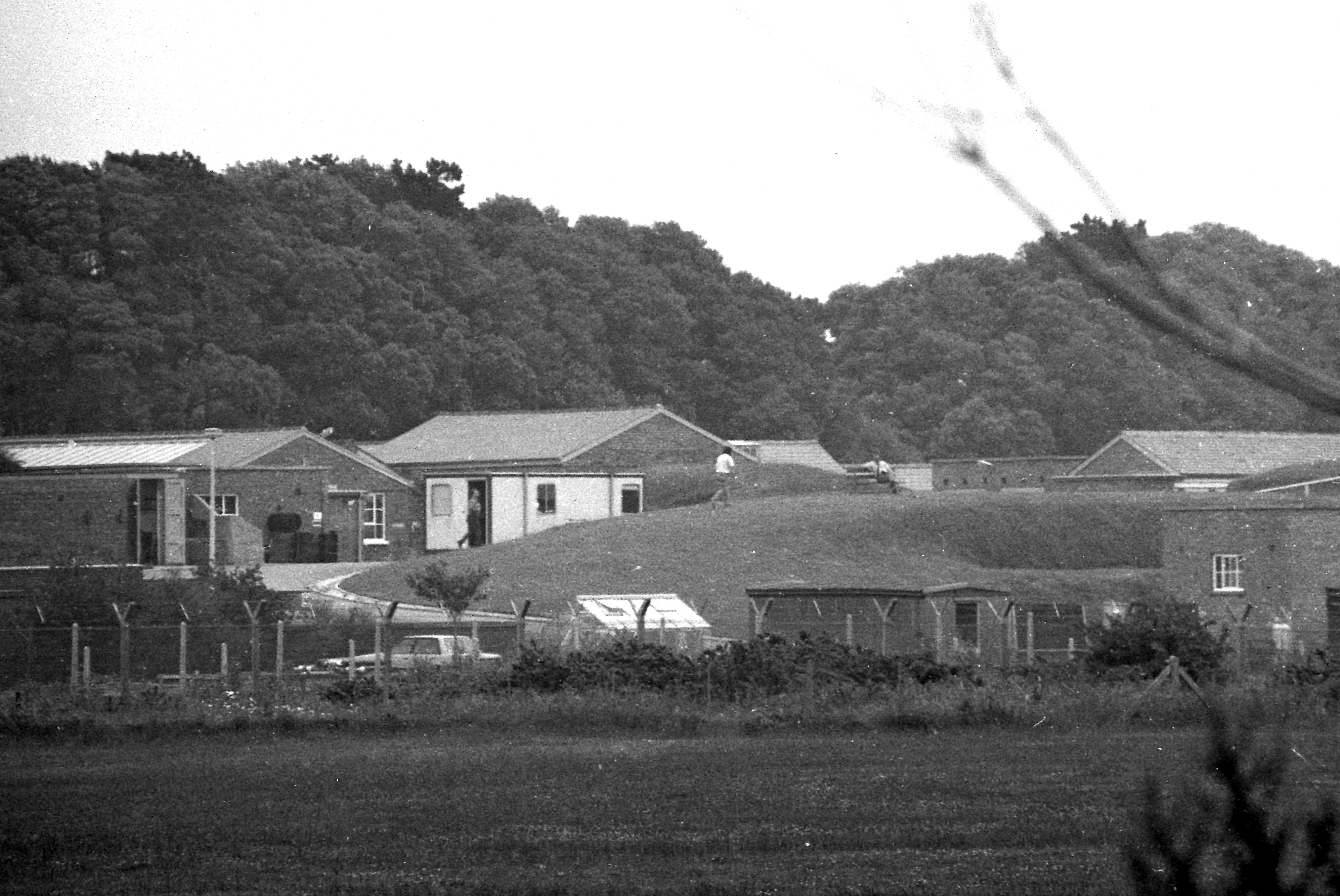 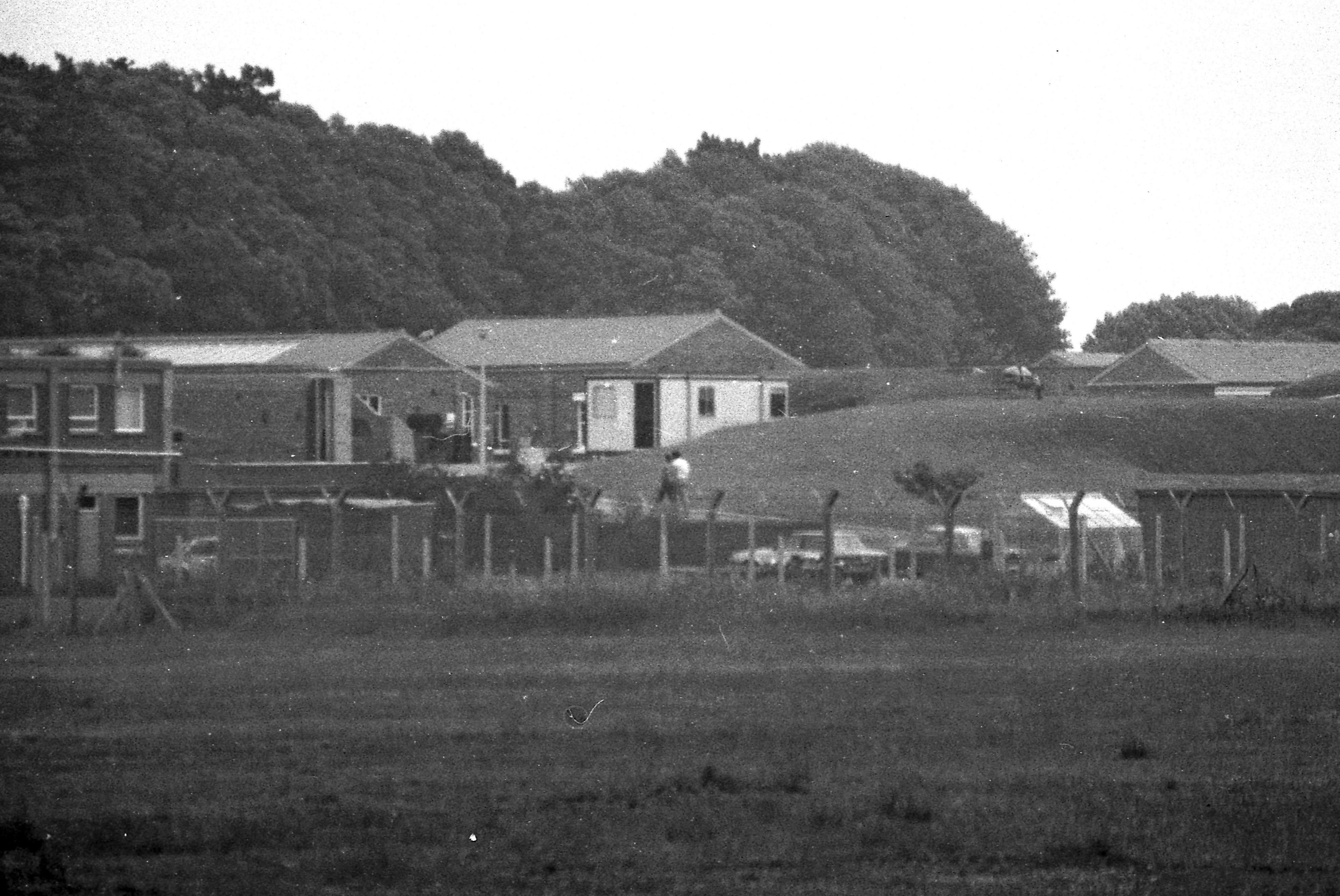 The above summary of functional areas within the RNPL is based on the 1980 brochure: Deep Saturation Diving AMTE Physiological Laboratory.

The following reference indicates the main investigators in the deep dive series. However, a quick web search will reveal the extensive contribution to knowledge made by these and others working at the establishment.

Here are some images taken on a sunny 11 Sep 2021. Although most of the more ‘modern’ buildings are now gone, others (possibly listed) remain. The earth bank, which made up the original fortifications of Gosport, will probably need to be reinstated if the site is ever to be considered for develoment. 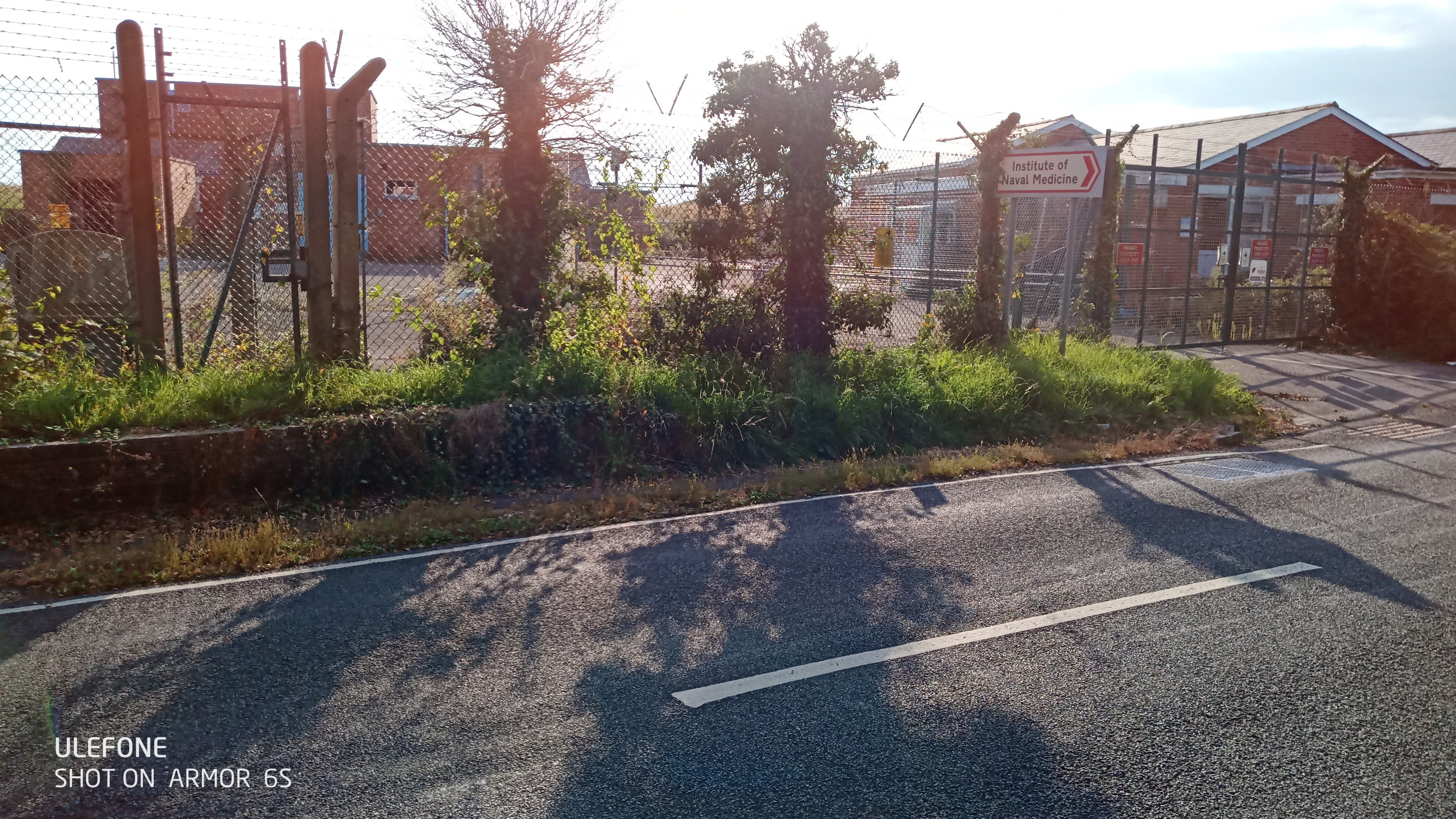 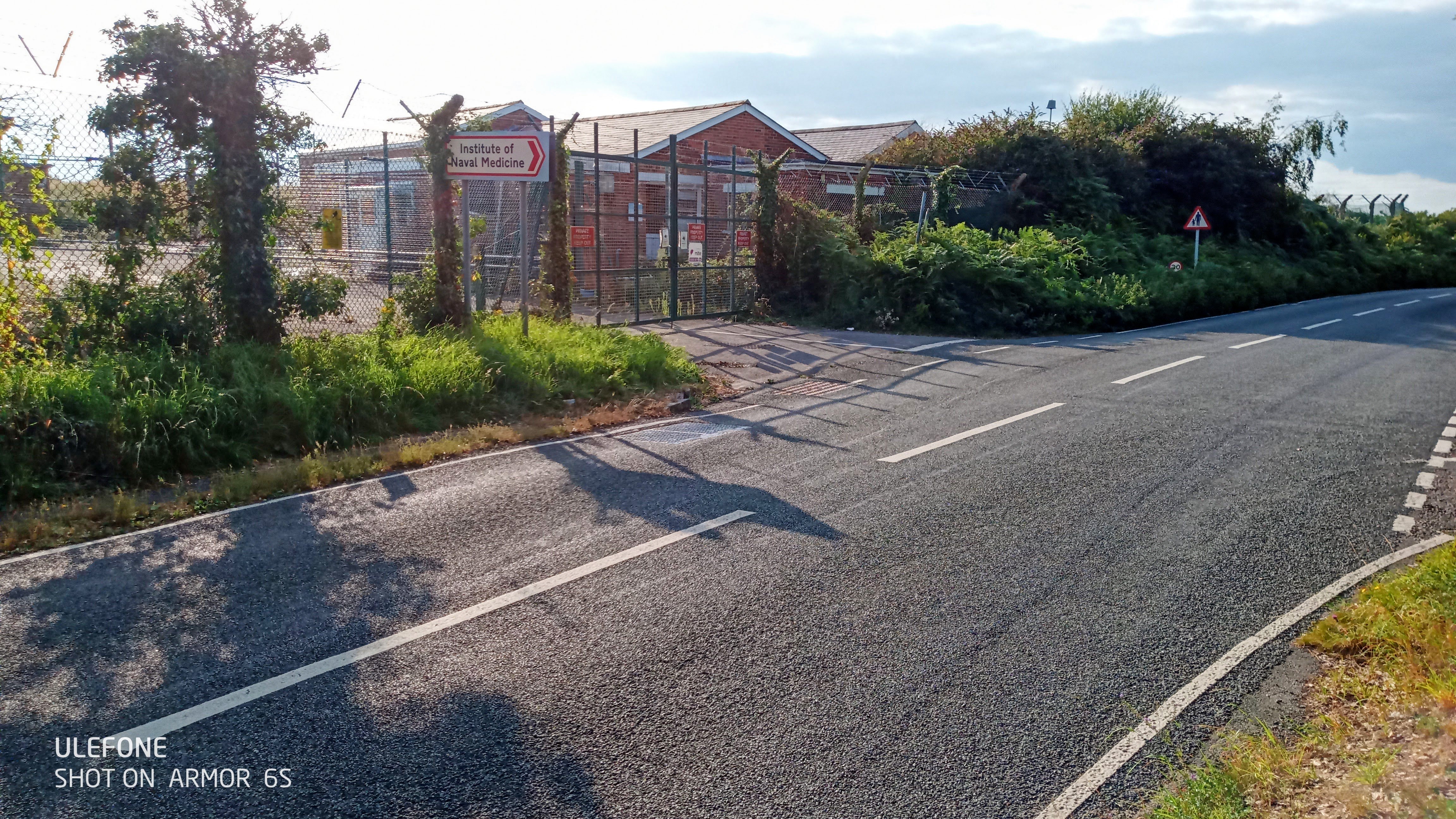 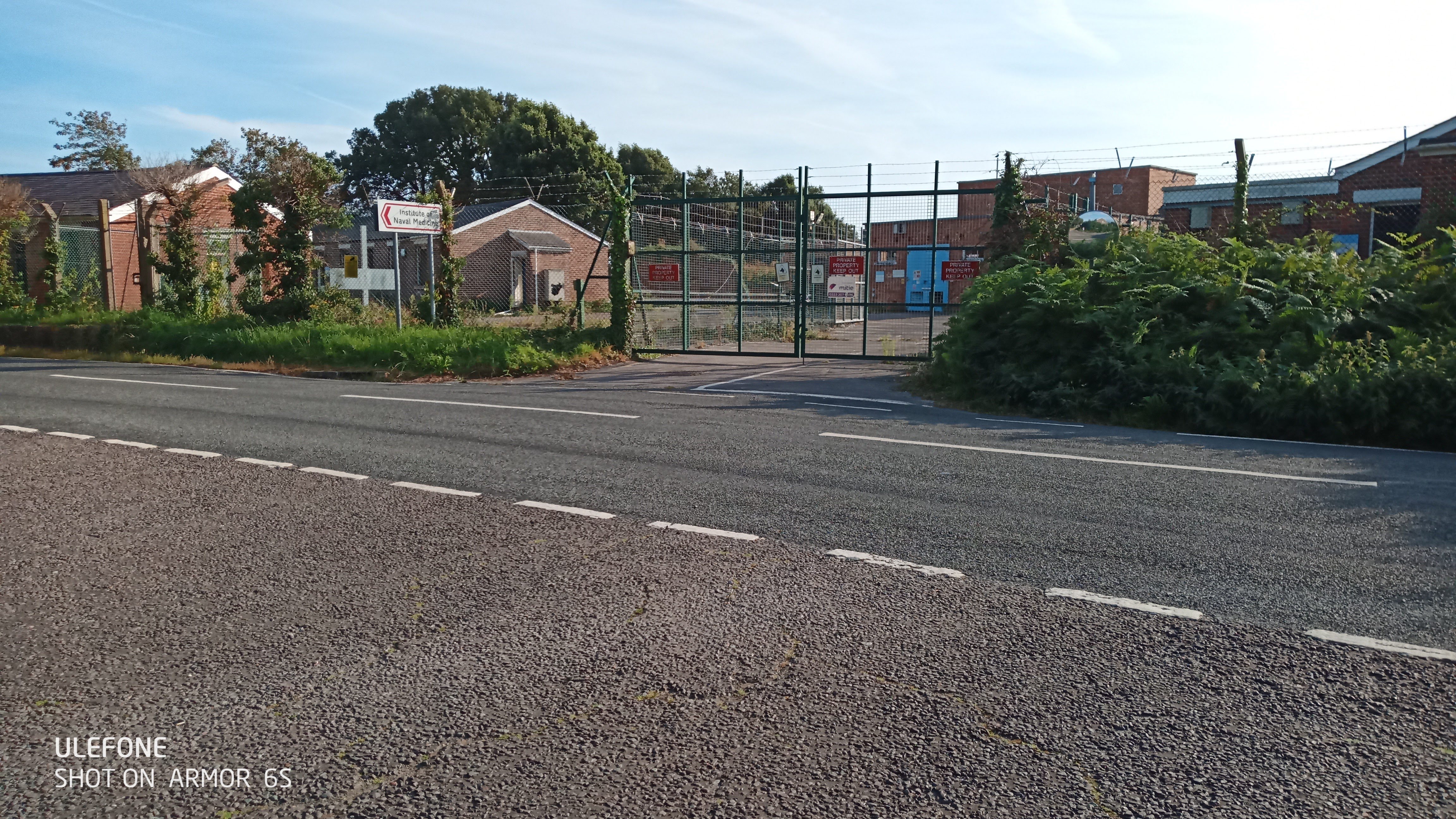 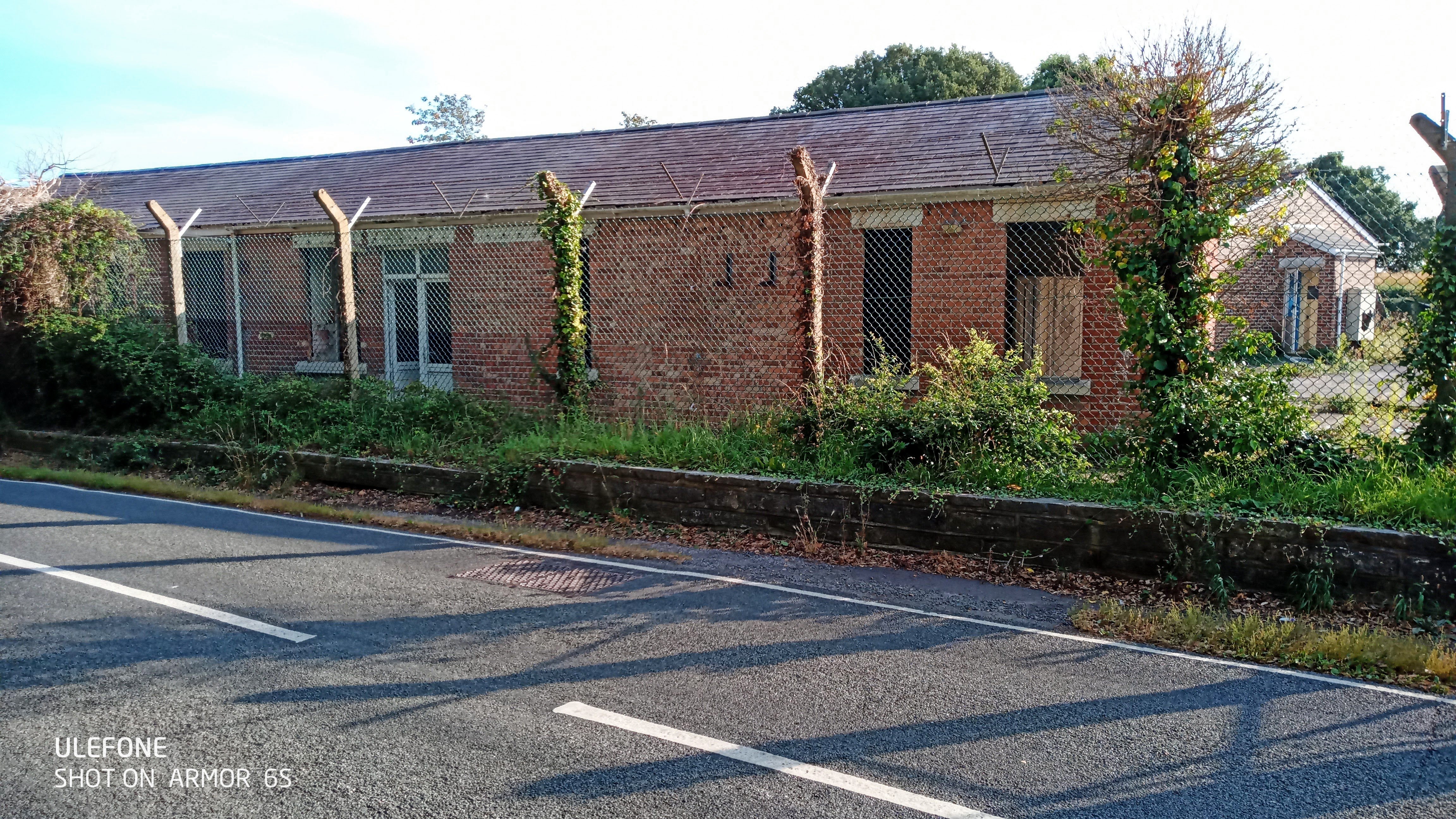