What Could Go Wrong?

Enough to cause some confusion, it seems. But, as it’s almost impossible to discuss numbering without mentioning materials and manufacture, do look at this page in conjunction with the next update which is all about JIM and other Atmospheric Diving Suits in the making at UMEL. Once again thanks must go to both Andy Price and Mike Webb whose images and narrative have certainly plugged some more gaps in JIM’s history.

Not exactly the beginning, but as far as our story’s concerned it all started with an aircraft designer’s obsession with building a successful ADS. By the early 1930s Joseph Salim Peress (1896-1978) had developed TRITONIA. It featured a torso made of lightweight magnesium alloy and joints that used a trapped cushion of oil to keep the surfaces moving smoothly. Sounds familiar, doesn’t it? Trials at depths of 443 ft (135 m) proved successful, but the suit never went into commercial production. That is, until the mid-1960s when the expanding oil and gas industry created a potential market for atmospheric diving suits.

Sensing an opportunity, Mike Borrow and Mike Humphrey managed to persuade an initially reluctant Peress to come out of retirement and join the team. But first they had to revive the TRITONIA. They found it buried in a Glasgow workshop under a pile of rubbish where it had spent the previous 30 years. The suit was stripped down, chemically cleaned and reassembled by UMEL in 1968. A now enthusiastic Peress test dived the suit himself in the UMEL tank at Farnborough. That suit, shown on the far left in image 1, subsequently became known as JIM 1 and the rest, as they say, is history.

Richard notes that circa 1978 the TRITONIA suit arrived at the RNPL workshop where some minor maintenance was carried out prior to a series of test dives in the tank at AEW with RNPL staff.

So, a bit of confusion already? Yes, because the very first JIM suit, with the now familiar design, was actually labelled JIM 2. It was completed in November 1971 and had a torso of cast magnesium alloy. Trials were carried out in 1972 on the RN’s HMS Reclaim (shown in image 2) to a depth of 152 m (499 ft). Lt Cdr Bob Lusty who was the Diving Officer on HMS Reclaim at the time remembers that JIM was considered to have ‘good engineering, but little practical use’.

Now JIMs 3 to 12, all with torsos of cast magnesium alloy, were numbered consecutively. Image 1 clearly shows 2-7, but just look at all the differences between them. The joints were designed to be retro-fitted so this image will not necessarily reflect what each JIM actually came with at the time of manufacture.

So far, so good. All appears to have gone relatively smoothly in terms of numbering, that is until we get to JIM 13 which didn’t actually exist, well the JIM suit did but no one was going to saddle it with that label or possibly get in it if they had. Something to do with the usual reason that anyone with a close association to the sea tends to be a tad superstitious.

It’s probably better to say ADS 14 and ADS 15 at this point. Why? you may wonder. Well, these were actually JIM variants called SAM 1 and SAM 2. They both had fabricated aluminium alloy main bodies and were designed to reach a depth of 1000 ft (305 m). Mike Humphrey can be seen diving a SAM in image 3. In appearance it looks a bit like JIM on a diet.

ADS 16 and ADS 17, both with fibreglass torsos. were commonly referred to as JAMs. In size they were roughly half way between JIM and SAM and were able to descend to 2000 ft (610 m). Now, unfortunately, JAM 17 was destroyed an oil rig fire which resulted in one of the SAMs being relabelled as SAM 17 (image 4). At this point Richard feels a short aside is in order.

‘When diving a JAM I noticed a low oxygen problem but, because of the more streamlined nature of the suit, I was unable to get my arm free to adjust the oxygen flow.’

How come he's still here then? you may well ask. Good question.

‘Well, standing on one leg at an angle in order to achieve some leverage and twisting my body within the suit (while almost dislocating my shoulder in the process) actually did the trick. In the event, I lost a lot of skin from my forearm, but this was certainly a great deal better than the alternative outcome. It was for this reason that I chose never to get into the even slimmer SAM suit.’

Richard says he will try not to offer personal opinions on the effectiveness of the different ADS designs, prefering you to reach your own conclusions. Nevertheless, this was just one of several occasions when a suit tried to kill him. Are you still with me? Good, except you won’t be for much longer, but that’s all part of the fun!

Getting back on course, you now know all about JIMs 18 and 19 as you’ve seen plenty of their images throughout this website. Both had cast magnesium alloy torsos and were commisioned by the UK MOD largely for research and training purposes, but also with a view to operational activities. By the way, JIM 18 was the first suit to be fitted with an acrylic dome, which turned out to be very popular with the divers because of the increased visibility. This type of dome had already been used on the WASP ADS. You can see, in image 8, that the idea was carried forward with the USN suits.

Image 5 shows UMEL’s Clive Hood (Design Engineer and Manufacturing Project Manager for the USN Project) preparing the first carbon fibre (actually, carbon fibre reinforced plastic (CFRP)) torso for pressure testing, circa 1983. Andy notes that just about all staff members were hands-on when required. OK, so now we have another (bit of a) JIM, unnumbered of course, but deserving a mention here because it was made to be tested to destruction. Image 6 shows how the material broke apart, which resulted in a review of the manufacturing process.

JIMs 20 and 21 were the two carbon fibre models made for the US Navy in 1987 and labelled USN1 and USN2 accordingly. So you can see how the confusion just keeps coming. Image 8 is a general view of the UMEL factory at Bordon, circa 1984, with the completed USN JIMs in the foreground and Norman Taylor (Centre Lathe Turner) looking left.

We do believe there was another JIM, with a carbon fibre torso, built at Slingsby Engineering for the UK MOD. However, this remains unconfirmed to-date.

You can see how a clear definition of terms is so important in the never ending quest to avoid misunderstanding. Finally, and for the sake of completeness, the last comment should refer to yet another naming convention that was in circulation at the time; the ‘ADS TYPE’ series, which you might also see mentioned within some of the reference material on this website. The following terms tended to be used in the factory but not operationally as they were not exactly meaningful in the latter situation: ADS TYPE I (TRITONIA), ADS TYPE II (JIM), ADS TYPE III (SAM), ADS TYPE IV (JAM). This may well have been an attempt to confound us further, so enough. Not exactly a brief overview, but there you have it. 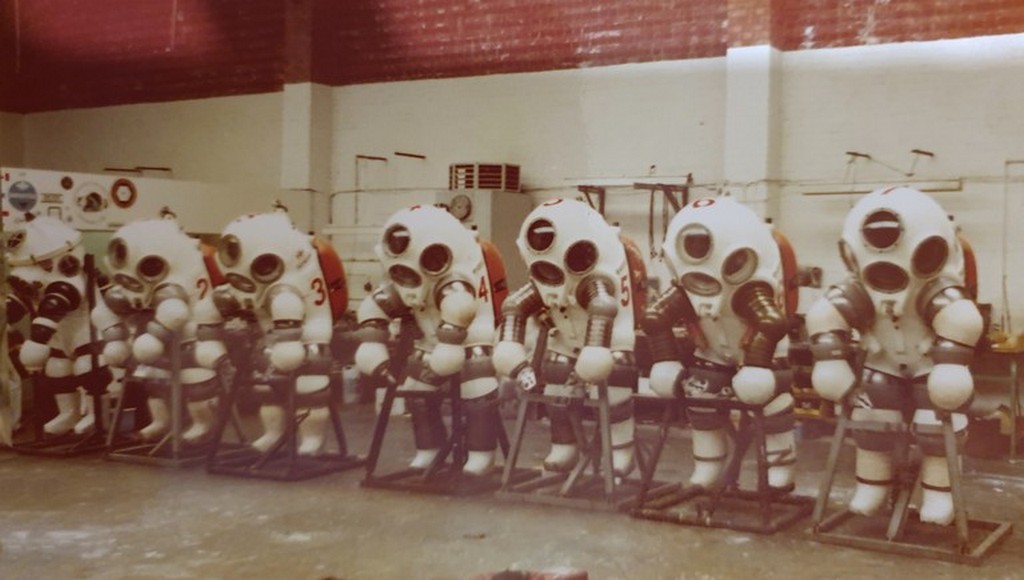 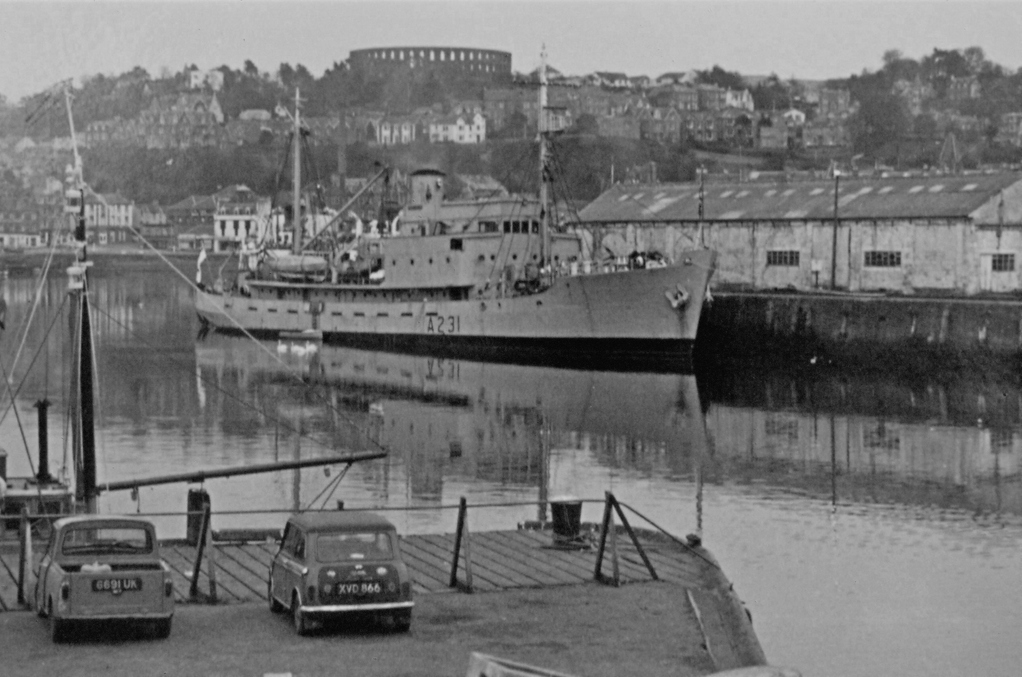 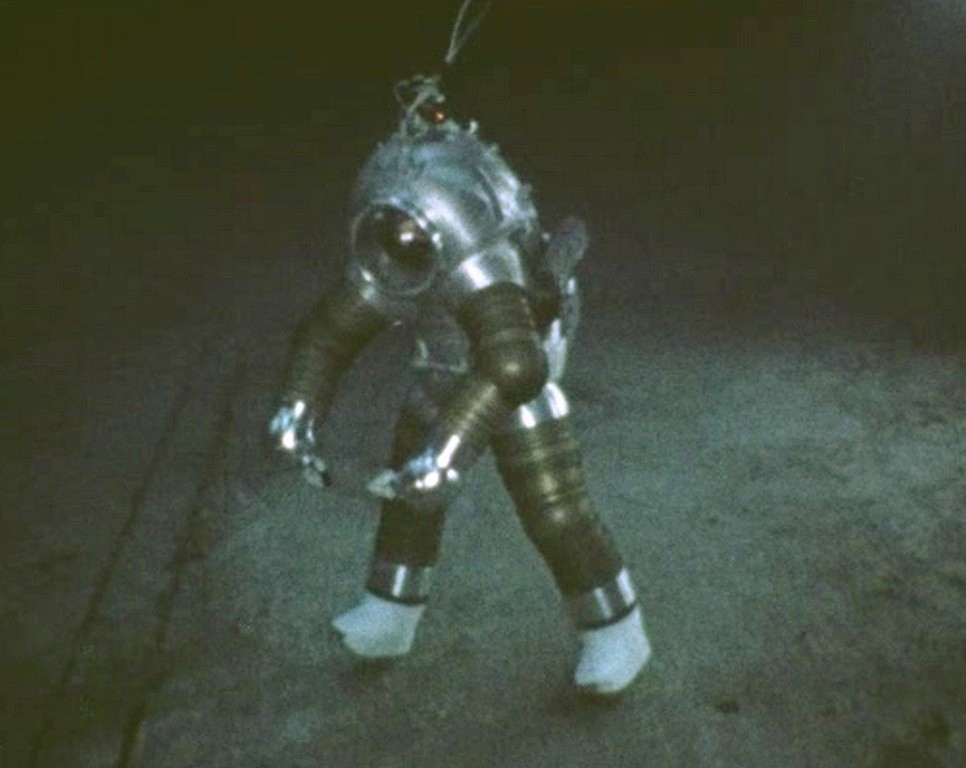 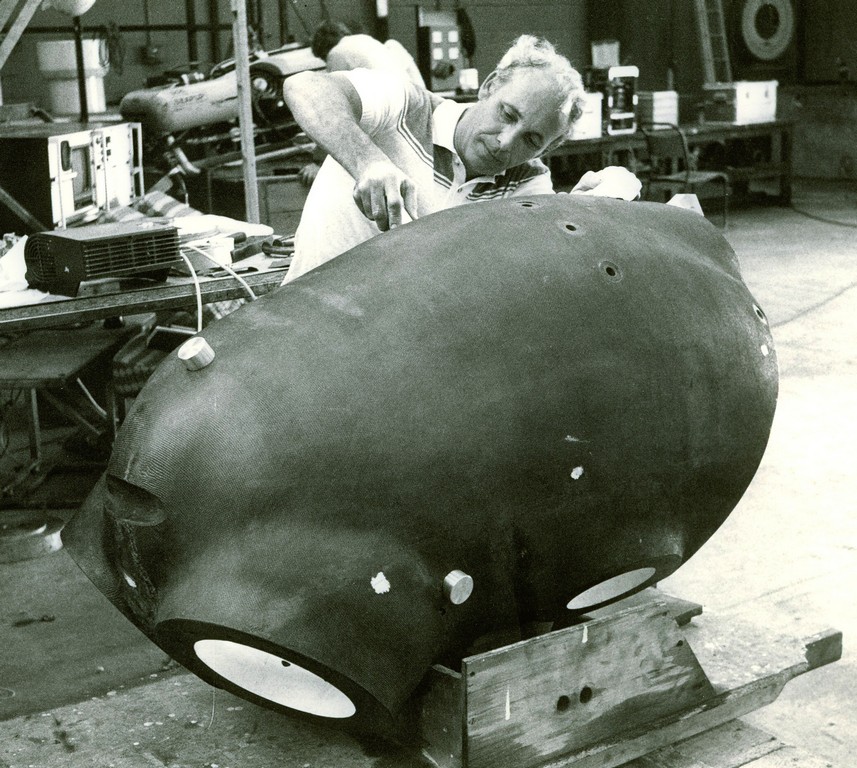 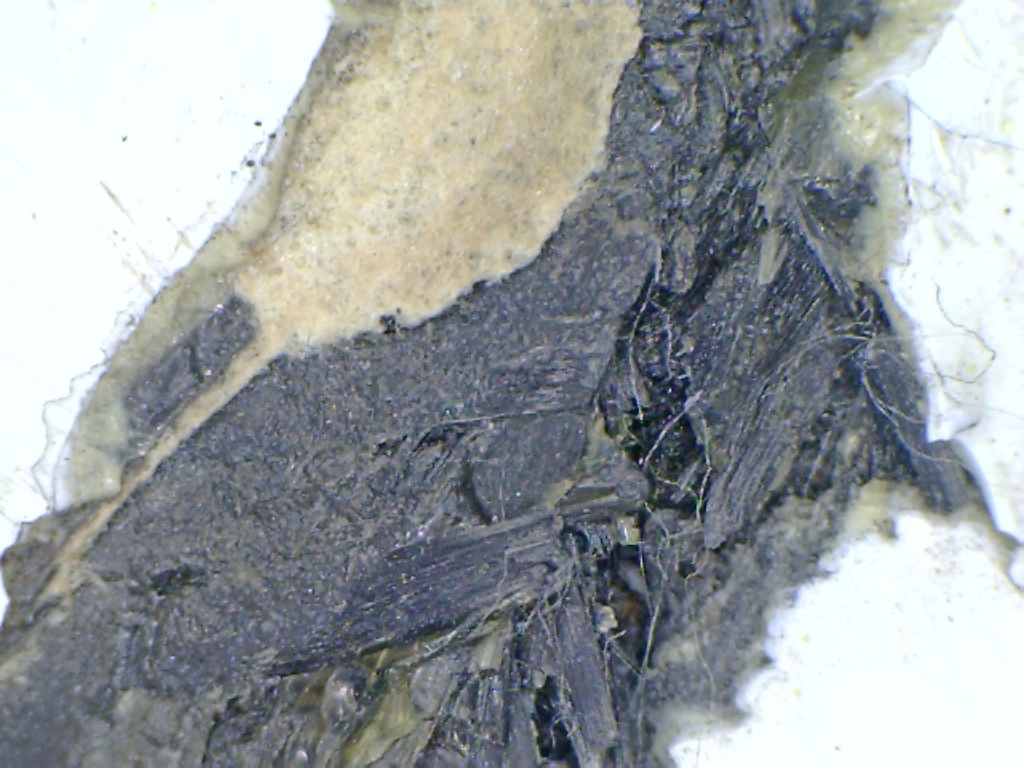 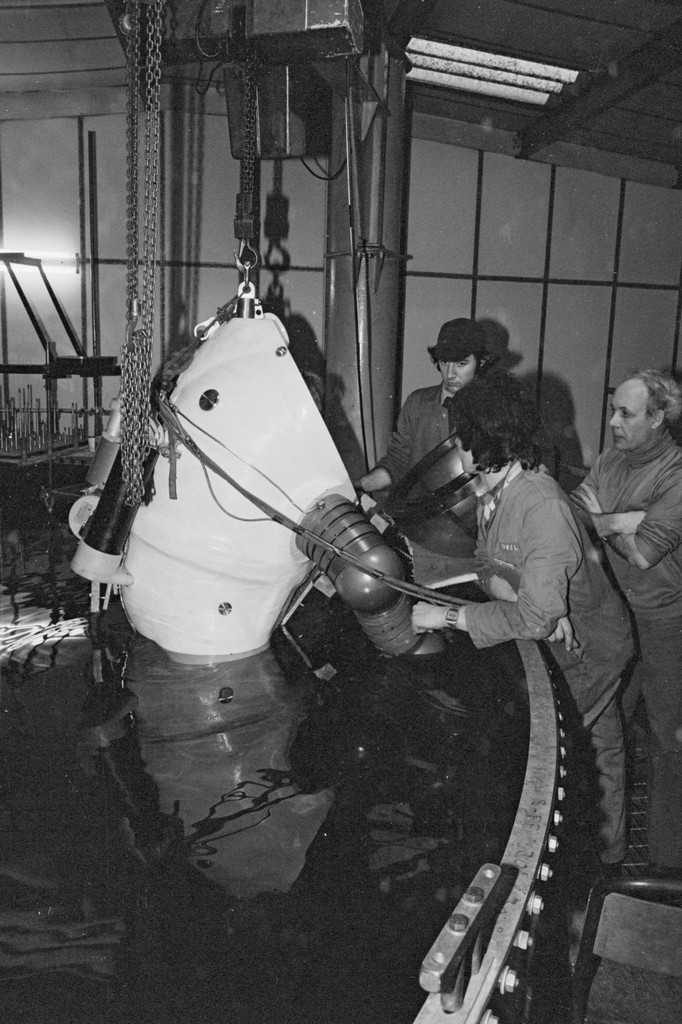 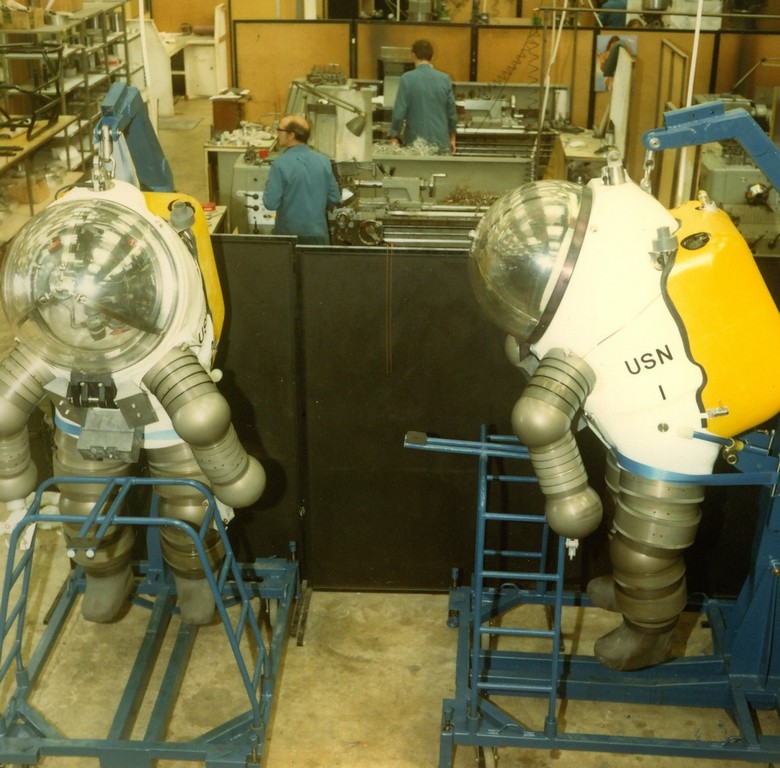